‘In the Cage Where Your Saviours Hide’ by Malcolm Mackay 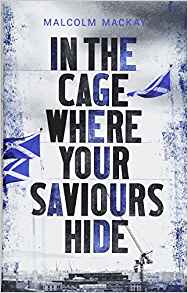 Readers of this unusual and exciting novel should forget anything they ever knew about Scottish history from the seventeenth century on, and quite probably before then. The author has provided an alternative history. The Darien Venture, in which almost the entire population invested substantial funds, brought, not complete financial disaster as readers may previously have thought, but success. The first settlers in Panama prospered and the settlement expanded, becoming known as New Caledonia. Thus, the Act of Union 1707 never happened, and Scotland kept its independence, not to say its own royal family. Were there any Jacobite rebellions, or clearances in the Highlands? Alternative history is silent on this point, as it is on the previous history. Did the Stuarts ever come to rule, not just Scotland but England and Ireland as well? Did Charles I lose his head, or Mary Queen of Scots hers? Indeed, were there ever any Stuart kings?

In this alternative Scotland, as New Caledonia prospers, Scotland itself declines. This story is set in its chief port the Scots Gaelic speaking Challaid on the north coast. Once flourishing Challaid is now run-down and in its mean streets crime is rampant while within the police force a strong degree of corruption exists. It is in those mean streets that the protagonist of this story has to search for the truth. He is Darian Ross, junior operative in Douglas Independent Research, a two-man firm of not quite private investigators. The senior partner, former police officer Sholto Douglas, is anxious to keep his former colleagues at arms’ length, particularly Detective Inspector Folan Corey, head of the anti-corruption squad of the Challaid police who is himself highly corrupt. But Darian is driven by his innate sense of justice, first in the case of a young girl who is attacked by someone whom Corey wishes to protect, secondly in the case of the murder of Moses Guerra, a small-time crook and money launderer. Police investigation of this last has been more or less non-existent and it is when Guerra’s partner Maeve Campbell asks Darian to search for the truth that he is drawn into a complex series of events. What is the nature of that truth?

This is in effect a classic private eye story set in this densely-imagined context. It is the latter which makes it truly remarkable. But it was the context which left with me with a whole lot of questions. Quite apart from the historical questions asked at the beginning of this review I wanted to know about the geography of this alternative Scotland. The location of Challaid is possible – near the real Loch Eriboll which is carved deep into the northern coast of Scotland. But does it include the Orkneys and Shetlands? What about the Outer Isles? How far south? How far east? Are Edinburgh and Glasgow included? If so, do they also speak the Gaelic? And on the religious issues, formerly so divisive, is this alternative Scotland uniformly and unyieldingly Presbyterian? Or am I just nit-picking? Anyway, highly recommended.
------
Reviewer: Radmila May

Malcolm Mackay was born and grew up in Stornoway where he still lives. His debut, The Necessary Death of Lewis Winter, marked the beginning of the Glasgow Trilogy, set in the city's underworld and was longlisted for both the CWA John Creasey Dagger for Best Debut Crime Novel of the Year and the CWA Ian Fleming Steel Dagger for Best Thriller of the Year. How a Gunman Says Goodbye is the second of the series.