‘The Old Religion’ by Martyn Waites 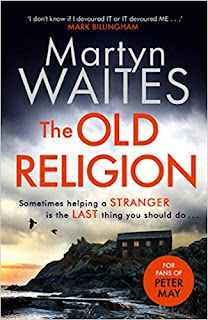 A new novel from Martyn Waites is something of an event in crime fiction circles, although he was never far away even when his name wasn't on the cover; for the past few years his alter ego Tania Carver has been enjoying great success. But now he's back under his own name, exposing the dark underbelly of another popular tourist destination.

The Old Religion is set in north Cornwall, better known for picturesque tea rooms, glorious coastal scenery and a history of fishing and mining than for vicious crime. But in Waites's Cornwall, drug dealing has taken the place of tin mining, and even the tourism that replaced the fishing is on the decline. There's a general air of decay and depression, largely brought about by the fallout from Brexit.

All the main characters seem to be in thrall to something. Ex-copper turned barman Tom Kilgannon is haunted by a past which could catch up with him at any time. Teenage Lila is trying to escape from the traveller community she has become caught up in, and Kai, one of its more naïve members, is obsessed with her. Noah, the community leader, is under the thumb of the mysterious Morrigan, as is the entire village of St Petroc, including the eccentric Pirate John, who isn't as batty as people think.

And when a lad on a surfing holiday nearby disappears without trace, everyone seems to be involved one way or another.

It's all set against a dark, brooding background of the kind of power-wielding and sinister ritualism that gives paganism a bad name, and it's down to Tom Kilgannon to set it all to rights. Which he does, but not without treading down some sordid and convoluted paths, sometimes literally.

There's a cast of characters who are all distinct and vivid, right down to the farmers and surfers who are only bit-part players. Tom Kilgannon is perhaps the most shadowy of them – but even that is as it should be. He is an incomer to the tight-knit community, and since the ending suggests that a series might be on the cards, there's clearly a lot to learn about him which Waites is saving for future volumes. And the not so pretty north Cornwall he creates is a rich seam to mine. I look forward to it.
-------
Reviewer: Lynne Patrick

Martyn Waites was born in Newcastle Upon Tyne. He trained at the Birmingham School of Speech and Drama and worked as an actor for many years before becoming a writer. He has been nominated for every major British crime fiction award and has enjoyed international commercial success with eight novels written under the name Tania Carver.

Lynne Patrick has been a writer ever since she could pick up a pen, and has enjoyed success with short stories, reviews and feature journalism, but never, alas, with a novel. She crossed to the dark side to become a publisher for a few years, and is proud to have launched several careers which are now burgeoning. She lives on the edge of rural Derbyshire in a house groaning with books, about half of them crime fiction.
Posted by Lizzie at 15:36