‘Woman of the Dead’ by Bernard Aichner 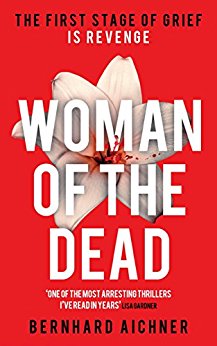 Brünhilde Blum’s childhood was marred by emotional abuse, but she has found happiness and security in marriage and motherhood.  Her fulfilling domestic life is complemented by her professional success running the Blum Funerary Institute, Innsbruck.  When, however, Blum’s idyllic marriage is unexpectedly shattered by the death of her spouse, Mark, she rapidly moves from the numbing paralysis of grief to a ruthless and energetic pursuit of those she believes are responsible for his murder.  Blum displays terrifying resilience and cool determination as she systematically begins to administer justice by hunting down the unwholesome gang that her police-officer husband had sought to expose before he was killed.

The tale is a chilling one.  When the protagonist of a novel spends her working life preparing corpses for their final resting places, the reader, gentle or otherwise, will inevitably encounter some unpleasant and gruesome events.  There are explicit and macabre descriptions throughout the book and I was delighted to find myself plunged into one spine-tingling chamber of horrors after another whilst being pulled every which way on a breathtaking ride to the scintillating conclusion.  Aichner researched for this novel by working, for six months, as an undertaker’s assistant, and his graphic depictions of the mortician’s particular skills are, at times, seriously bloodcurdling.

The story also explores Blum’s psyche through a backstory that reveals the dysfunctional relationship she had with her adoptive parents.  A series of premeditated and cruel acts of vengeance by the intrepid undertaker results in the elimination of several hideously sadistic criminals; the question is whether Blum’s merciless punishment is justified or not.  Despite several of the villains meeting quite hair-raising ends, I found myself applauding Blum’s resolve and courage and willing her on to finish the job.  Woman of the Dead is an exhilarating, unusual and deliciously frightening read.
------
Reviewer: Dorothy Marshall-Gent

Bernhard Aichner is an award-winning author and photographer living in Innsbruck, Austria. His books have been translated into eight languages.