'The Turncoat' by Alan Murray 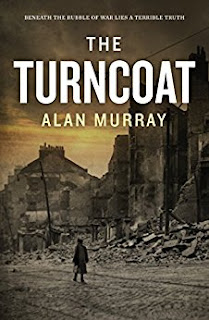 In 1941 the Glasgow docks suffered 2 days of appallingly heavy German bombing.   The way that the bombers were able, on the second night, to hit with great accuracy the important targets that had survived the first raid, led to the suggestion that German spies had told the bombers what to attack.  Major George Maclean and Sergeant Danny Inglis of the Military Police are set  to find those informants.  Knowledge of the area and the attitudes of its inhabitants is very valuable to them.  In a tough dockside world brutality is rife.  George had learnt to speak German as a student in Berlin in the 1930s so his memories of the conflicts of Communists and Nazis in those days further enrich the background of this story.

The tale actually starts with the 2 men looking at the corpse of a dock worker who had given them some clue to help their search.  They continue their work within and outside Glasgow and become involved in the treatment of a Nazi pilot who had been captured after a crash.  This man makes preposterous claims.  The violence of war is ever present with the brutality of men on both sides exacerbating events.

This thriller starts slowly and builds to a terrific climax.  Mixing  history with fictional elements produces an exciting tale well rooted in real events.
------
Reviewer: Jennifer S. Palmer
Alan Murray has published a number of nonfiction books and his debut novel in 2014 was Luigi's Freedom Ride.

Alan Murray is an acclaimed historian and novelist, originally from Edinburgh, but who has lived in Australia, New Zealand and Japan over the last 25 years. He has published eight non-fiction works and is a recognised international expert on Australian coal mines and their communities. His debut novel, Luigi's Freedom Ride, was published internationally in 2014, and was widely praised. He lives in New South Wales. Australia.