‘The Partnership Track’ by Michael Ridpath 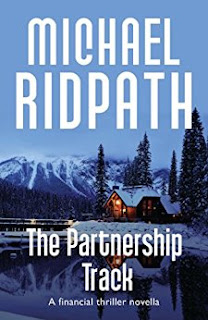 When you get offered a Vice presidency in a small, elite and prestigious banking outfit known for daring imaginative takeovers, it’s not unusual to celebrate with your best friend.  But if the best friend says ‘Don’t do it!’, you want to know why. Swearing his friend to secrecy Peter Breaton tells his story of the partnership selection at Labouchere Associates that took place the previous year.

The promotion to partner was in April, he explained, and six candidates were competing for the one post, worth a million a year. In March they were destined to be put through a series of exercises, watched closely by Bill Labouchere, said to be a genius, and also a  psychologist, to ascertain their suitability.

So in wintery condition, the six candidates travelled to an isolated mountain lodge in New Hampshire’s White Mountains for a weekend of corporate mind games. At dinner that first evening they were sizing each other up. Who was the front-runner? Who did they need to beat in order to win?

I have to confess I gave hearty thanks for being retired when I read the passage about the first-night welcome. Everyone was feeling tired after a long drive and plenty of food and wine when the boss said they would each find in their rooms the details of the following morning’s exercise, which they would need to prepare that night: three teams of two would role-play a corporate takeover. How well I remember that kind of thing, but I didn’t have to experience Bill, whose questions tripped everyone up however they answered. Was someone prepared to commit murder to win a the prize.

The Partnership Track is Michael Ridpath - a true story-teller - at his best.  His financial thrillers are just brilliant. The 20,000- word novella has a surprising twist and is highly recommended by this reviewer.
------
Reviewer: Lizzie Hayes

Michael Ridpath was born in Devon in 1961, but brought up in Yorkshire. He was educated at Millfield, Merton College, Oxford. Before becoming a writer, Michael Ridpath used to work in the City of London as a bond trader.  He has written eight thrillers set in the worlds of business and finance, but is now trying his hand at something slightly different.  Where The Shadows Lie, the first in the Fire and Ice series featuring an Icelandic detective named Magnus Jonson, was published in 2010.  He has published three further books in the series.  He now lives in North London.