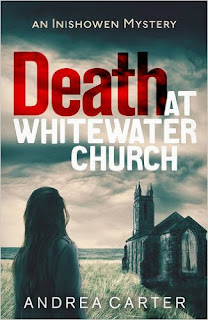 When surveyor Paul Doherty discovers a skeleton in the crypt of the deconsecrated Whitewater Church  it turns the lives of many of the small community of Inishowen upside down.  The immediate conclusion is that it must be the bones of Conor Devitt, a local man who went missing on his wedding day six years previously.

As the small town await the post mortem results which will maybe put an end to the six-year speculation as to what happened to Connor Dwvitt on the day of his wedding to Lisa, Solicitor Benedicta 'Ben' O'Keeffe  who is acting for the owners of the church, sees a most unwelcome face from her past.

This one of the most intriguing mysteries I have read in a long time. As with most small villages, Ben O'Keeffe discovers that in Inishowen there are many secrets.  But then as we soon learn, Ben O'Keeffe too has secrets.

The characters are well drawn and the story moves along at a satisfying pace, with twists and turns along the way as Ben is slowly drawn into the mystery which reaches its’ tentacles back into Irelands  troubled history.

The investigation is headed up by enigmatic Sergeant Tom Molloy, to whom Ben is drawn, but her past hold s her back from anything but friendship.  Then Connor’s brother dies in mysterious circumstances and Ben begins to piece together bits of information that may get her killed..

I loved this book, I couldn’t put it down, and I am delighted to read that Death at Whitewater Church is the first in a series of Ben O'Keeffe mysteries set on the Inishowen peninsula in County Donegal, of which the area is almost a charter in the story, so powerful is the description – I just wanted to go there and see it for myself.  I will be first in line for the next episode.
Most highly recommended.
------
Reviewer: Lizzie Hayes 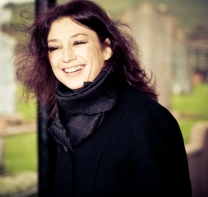 Andrea Carter is a barrister living in Dublin. She grew up in Ballyfin, Co Laois.  She graduated in law from Trinity College, Dublin in 1991 and qualified as a solicitor, setting up her own practice on the Inishowen peninsula in Donegal in 1998. In 2005 she transferred to the bar and moved to Dublin to practise as a barrister.
In 2011 she was a finalist in the Irish Times Power’s Whiskey Short Story Competition and her short story, What Maisie Did, was published in Celebrating What Really Matters - Powers Whiskey Short Story Collection.