‘And is there Honey Still for Tea’ by Peter Murphy 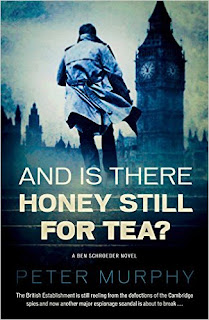 This is the third book in the series about Ben Schroeder and his progress as a junior barrister in 1960s’ England.  He is now happily involved in the early stages of a love affair with Jess, who has a temporary post in a firm of solicitors which sends work to his Chambers.  One such case is a libel action:  Francis Hollander, an American academic, has accused Sir James Digby QC of being a Soviet spy with links with the Cambridge spies, Burgess, Maclean and Philby.  The British press has taken up the story and Sir James must try to salvage his reputation.  Ben and his colleagues can see no apparent evidence to support the accusation, but plan their tactics and wait to see what Professor Hollander’s defence will be.  However, when a Government lawyer and an MI6 agent take an interest, it becomes clear that the case is more complex than was initially apparent and the stakes are upped for all involved.  To get the information that will decide the case, Ben must make decisions that could affect his career.

In parallel with this Ben and Jess are stunned to discover that their relationship has come to the attention of the Inn of Court to which he belongs.  It is a disciplinary offence for a barrister to use social connections to tout for work and their love affair could well come within that definition.  Both are appalled and furious at this outmoded view, but have to agree to let the Head of Chambers, Bernard Wesley, deal with it in his own somewhat idiosyncratic way.

The twists, turns and surprises of the libel action, the tensions of the love affair, and the lucid overview of the game of chess and its role in the relationship between the Soviet Union and the West, make this a gripping, enjoyable and informative read.
------
Reviewer:  Jo Hesslewood
Other books by the author:  Removal, Test of Resolve;  The Ben Schroeder series:  A Higher Duty, A Matter for the Jury;