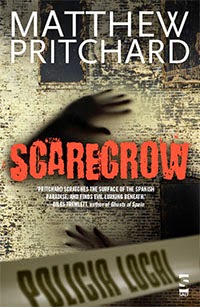 There are thousands of ex-pats, mostly British, many elderly, who have chosen to live in sunny Andalusia in Southern Spain, sinking their savings into a nice little villa-style bungalow.  Unfortunately, all too many of those bungalows have been built in defiance of Spain's convoluted and contradictory planning and building laws and where the authorities can trace the paper trail they issue orders to have the building demolished. No compensation is payable. One such unhappy couple are Peggy and Arthur Cooke and it is while they are watching the demolition of their home that a macabre discovery is made: between an outside wall and a previously unsuspected false wall is a corpse, wrapped from head to toe in black masking tape. Among those watching the demolition is journalist Danny Sanchez, crime reporter on a local English-language newspaper for ex-pats, ever on the look out for a dramatic story, and his colleague photographer Paco Pina. Danny's journalistic instincts lead him to some more expats, this time the three menacing Hacker brothers who had built the villa, their equally menacing mother, and a duo of Rottweilers. And then the trail leads to another Hacker-built house, apparently deserted except that there is another false wall behind which is another tape-wrapped corpse. Now Danny remembers a similar set of killings from his early years as a trainee reporter on a provincial English newspaper; the perpetrator (whom the tabloids christened The Scarecrow) in that case was caught and incarcerated in a high-security psychiatric hospital but given the similarity between those killings and these has the perpetrator been let out, moved to Spain and started killing again? Or was he not the actual killer? Danny travels to England to see what he can uncover and discovers that although The Scarecrow is still incarcerated there had been a subsequent series of similar killings which had been attributed to a copycat. But was that really so? Or is there someone behind all these killings cleverer and more astute than the pathetic losers who actually carry them out?

My reaction when I began this book was: yet another hard-bitten journo on the trail of yet another serial killer? Again? However, of this genre this is an extremely well-written example. The author was a journalist in Southern Spain writing mainly for expats and although Danny does a fair amount of door-stepping etc (in the belief that journalists have a God-given right to all the information they want whatever the circumstances), he is also prepared to spend time searching archives and the like. And I particularly liked the Hacker brothers and their scary mother – I was reminded of the Anglo-Saxon tale of Beowulf and his battles with the monster Grendel and Grendel's monstrous mother! Recommended – especially for serial killer afficinadoes!
------
Reviewer: Radmila May

Matthew Pritchard worked as a journalist in Spain for ten years, mainly for the ex-pat press, but also for UK nationals (at which he has some good connections). He grew up in a house filled with gas masks, military helmets, swords and rifles and has possessed a lifelong interest in WWII ever since. Together with his father and uncle, he has amassed a sizeable collection of memoirs and memorabilia contemporary to the period.
Posted by Lizzie at 11:44