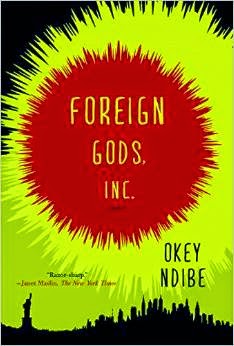 Ikechuku Uzondo (Ike for short) from Nigeria won a Rotary scholarship to study economics in the United States. He did well, extremely well, and thought that with his qualifications he should be able to get a good job in the States and earn enough money to make a good life for himself and achieve his wish to support his widowed mother and other family members. But his dreams have never been realised - the chief stumbling block is apparently his Nigerian accent - and after thirteen years he can only scrape a living as a taxi driver in New York. Few Americans from all communities understand or are even interested in his Nigerian culture. A disastrous marriage and a gambling habit make matters worse. But for some time Ike has been nurturing an idea: there is a market in the US for foreign gods. Indeed, there is even a shop called ‘Foreign Gods Incorporated’ which is prepared to buy statues of such gods. And in Ike’s home village in Nigeria there is just such a god - Enugu, a powerful war god. And Ike’s uncle Osuakwa is Enugu’s priest. So Ike borrows money for the airfare and travels back to Nigeria. When he arrives he finds that corruption is rampant and corrosive, his mother and his sister are under the sway of Pastor Oku who preaches a potent mixture of hellfire Christianity and ancient superstition. Ike’s uncle and his aged grandmother have stayed true to the old beliefs and Ike finds that they seem to be leading happy and fulfilled lives. Nevertheless, after a short struggle with his conscience, Ike takes Enugu and returns to the US hoping that selling the statue of Enugu will solve his and his family’s financial problems. But Enugu is a powerful god who had seen off early Christian missionaries years before and his displeasure makes itself felt with evil consequences for Ike.

I thought this was an excellent and interesting read. It is much more than a simple heist story with horror elements. The extent of corruption in Nigeria is deeply depressing as is the poverty and the treatment of widows and wives with violent husbands. There are some comic aspects which lighten the tone and add to the reader’s enjoyment: Ike’s rich businessman friend Tony Iba has a highly idiosyncratic way with the English language while Pastor Oku is positively Dickensian and reminded me of Mr Squeers, the tyrannical head teacher of Dotheboys Hall in Great Expectations. But overall Ike, for all his likeability, is a tragic figure, unable to fit into either the world of his Nigerian childhood or the prosperous world of the United States to which he aspires. The book reminded me of that classic of Nigerian literature, Chinua Achebe’s Things Fall Apart.
------
Reviewer: Radmila May 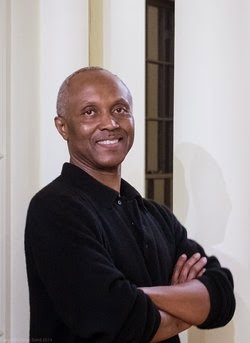 Okey Ndibe is the author of two novels, Foreign Gods, Inc  (named one of the best books of 2014 by, among others, Janet Maslin of the New York Times, National Public Radio, Philadelphia Inquirer, Cleveland Plain Dealer, and Mosaic magazine), and Arrows of Rain. He is also a co-editor (with Zimbabwean writer, Chenjerai Hove) of Writers Writing on Conflicts and Wars in Africa. His career as a writer began after he responded in the affirmative when a novelist asked, "You're working on a novel, right?"
Ndibe earned MFA and PhD degrees from the University of Massachusetts at Amherst, and has taught at Brown University, Trinity College, Simon's Rock College, Connecticut College, and the University of Lagos (as a Fulbright scholar). He served as the founding editor of African Commentary, a US-based international magazine published by the late novelist, Chinua Achebe. In addition, he was a member of the editorial board of Hartford Courant, the oldest continuously published newspaper in the US, where his journalism won national and state awards.
Posted by Lizzie at 16:56