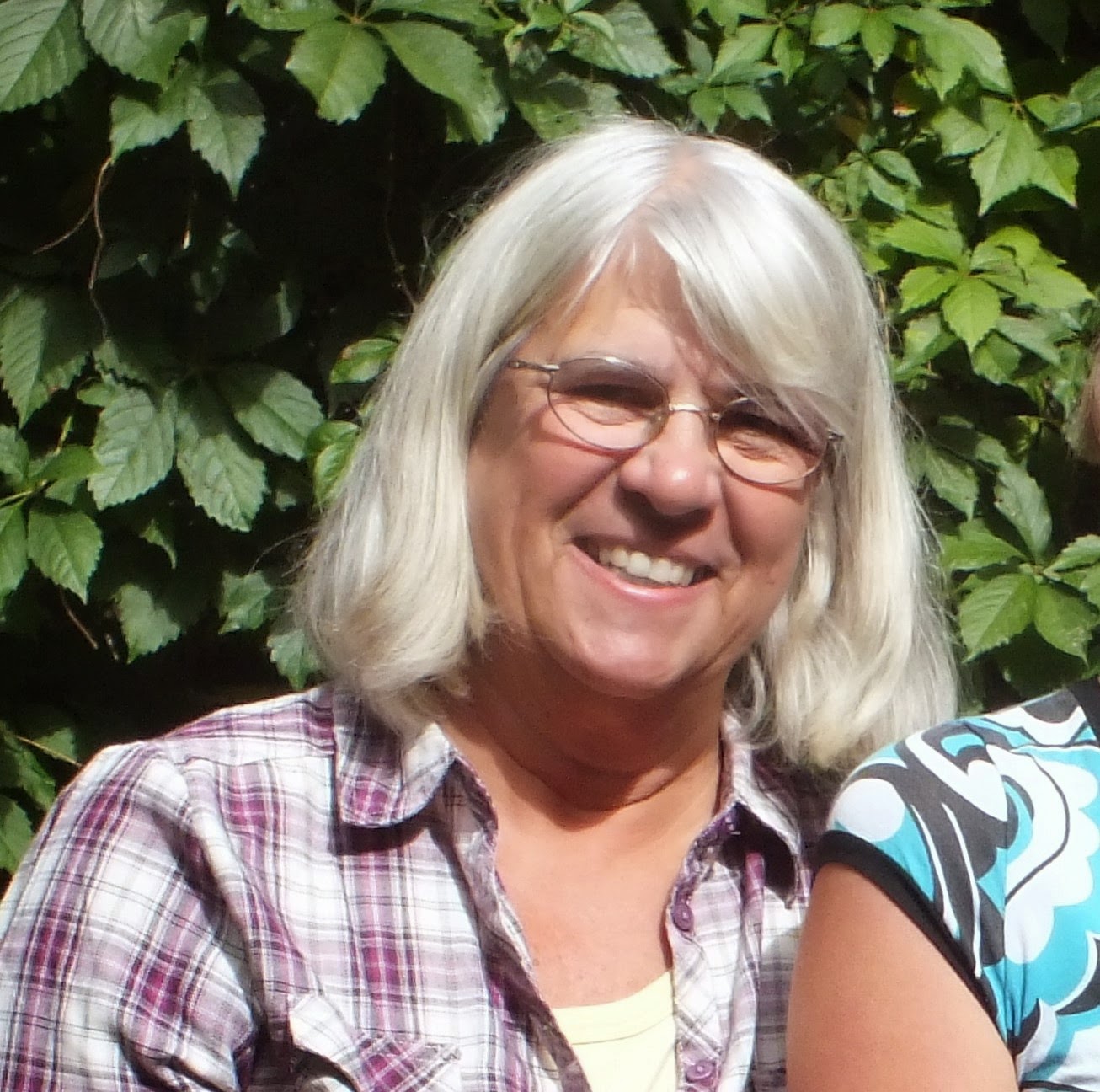 Rebecca Tope is the author of four popular murder mystery
series, featuring Den Cooper, Devon police detective,
Drew Slocombe, Undertaker, Thea Osborne, house sitter in the Cotswolds, and more recently Persimmon (Simmy) Brown, a florist in Windermere.
Rebecca grew up on farms, first in Cheshire then in Devon, and now lives in rural Herefordshire on a smallholding situated close to the beautiful Black Mountains.
Besides "ghost writer" of the novels based on the ITV series
Rosemary and Thyme, Rebecca is also the proprietor of a small press -
Praxis Books.  This was established in 1992

Lizzie: Rebecca your new book Revenge in the Cotswolds, featuring  house-sitter Thea Osborne  is due out in March. Can you tell us about this book?
Rebecca: This is the 13th title in the series, and sees Thea house-sitting, as always. The house is in Daglingworth, close to Duntisbourne Abbots, where the whole business began. The story involves a group of activists with a mainly Green agenda. One of their number is murdered, and Thea is once again drawn into the search for an explanation of who, why, how, etc.

Lizzie: You have four series, although you currently seem to be alternating between the Cotswold series and the Lake District one featuring Persimmon (Simmy) Brown, a florist working in Windermere and living in Troutbeck. However the recent Cotswold books have also featured Undertaker Drew
Slocombe.  What prompted you to link the two series?
Rebecca: Strictly speaking, I don’t see them as four separate series. It all goes back about 15 years now. I wrote A Dirty Death and submitted it to Piatkus Books. In the 16 months (!) it took them to decide whether to buy it, I wrote another novel, featuring a different set of characters. I only ever intended these two as stand-alones. But somehow they both seemed to lend themselves to sequels, and then the ones featuring Den Cooper were joined by a third title. At that point I changed publishers, and it just somehow happened that the first book with Allison & Busby The Sting of Death included Den Cooper and Drew Slocombe. After one further title like this, I made a whole new start with Thea in the Cotswolds. And somehow, Drew just found himself showing up in the 8th book of the series, and Thea went and fell for him. Den hasn’t completely disappeared, either.

Lizzie: Did you always want to write or was the idea sparked by the people you encountered in some of your rather diverse occupations, ie, marriage counsellor and working for a funeral director?
Rebecca: I always wanted to write. I have at least a dozen (and I think it’s closer to twenty) finished (but mostly unpublishable) novels around the place. The first one was written when I was seventeen. They are in every genre you can think of and in a great range of styles.

Lizzie: You set your books in real villages (Duntisbourne Abbots, Frampton Mansell, Brockley, Temple Guiting, Lower Slaughter, Cold Aston, and Hampnett, Broad Campden, Snowshill and Winchcombe). Do the villagers approach you when you are visiting a village to feature in a book, and if so are they friendly, or do you travel in disguise?
Rebecca: I travel in disguise! At least, I actually don’t go to the villages more than two or three times, just to see where the church and the pub are situated. I sometimes sign the visitors book in the church, but I don’t think anyone has ever noticed.
Lizzie: Do you plan your plots before you start writing?  And, if so, do your books change during the writing process, or do they pan out exactly as you originally planned?
Rebecca: I plan almost nothing. The village itself proves the impetus, with Thea turning up on page one, at an unknown house in a strange village. We follow her experiences and observations from there on.
With Simmy, the story starts with a delivery of flowers, and I take it from there. If anything, I am even more in the dark with her than I am with Thea.

Lizzie: You have acted as ghost writer for the novels based on the TV series Rosemary and Thyme.  How did that come about?
Rebecca: I really can’t remember the details. David Shelley at Allison & Busby was approached by Brian Eastman, I think, and he suggested me. It was a very enjoyable exercise, but a long time ago now.

Lizzie:                When embarking on a new book, what area of the book challenges you the most, and which part of the writing process do you most enjoy?
Rebecca:           The plots get increasingly difficult to control, with the clues very disobedient at times. I don’t much like revision. Favourite part is inventing and developing the characters. I like doing dialogue, as well.

Lizzie:                You have a smallholding with Cotswold sheep. You also I understand spin wool from them. Animals place regular demands on their owners. So do you have a regular time set for writing? How do you plan your day with such calls on your time?
Rebecca: The morning routine is fairly inflexible. Animals impose a strict timetable, and make their feelings very plain if I’m ever late. So I feed them first, then settle down to writing. The spinning, knitting, weaving, etc fill my evenings. I travel quite extensively, too. Fortunately I have a very good deputy who I suspect is more popular with the animals than I am.

Lizzie: In 1992, you founded Praxis Books, a small British press. What occasioned this?
Rebecca: That’s a long story. The first title was In Search of Life’s Meaning, which I helped to write. When we couldn’t find a publisher, we did it ourselves. I have worked in publishing on and off all my life, so knew much of the process, and have a great fondness for printers, who have always been the sweetest people in the whole industry.
From there I went into reissuing the novels of Sabine Baring-Gould, who is a great passion of mine. I’m still doing them – Nebo the Nailer came out in September 2014. I’ve also published a few other titles that took my fancy. The Poet’s Kit by Katherine Knight was a big success, as was By Way of Beachy Head by Joyce Tombs. I enjoy all the different aspects of publishing, and still find it rather romantic, even now. 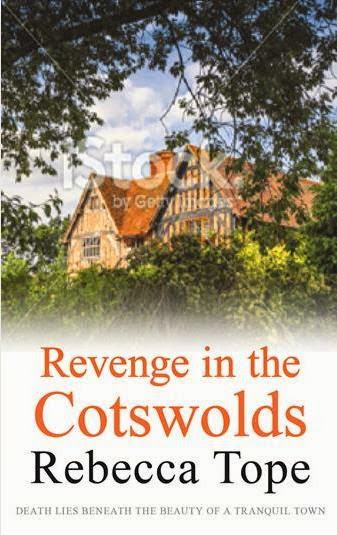 Thea Osborne, Cotswold house-sitter with an infamous reputation for getting mixed up in crime, is determined to avoid trouble this time. Her latest commission in the village of Daglingworth seems straightforward, with most of her time spent looking after an old corgi and a hibernating tortoise.
Thea is ready for a relaxing if rather boring two weeks, with phone calls to new boyfriend Drew Slocombe the highlight of her days. Until, that is, a dead body is discovered in a nearby
quarry...