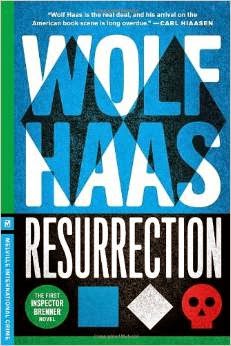 A few days before Christmas, in the little ski resort of Zell in the Austrian Tyrol, the bodies of an elderly American couple, Ted and Suzanne Parsons, are found frozen to death in two separate ski lifts. No-one can understand why they were left in the ski lifts overnight but as foul play is not suspected, the police abandon their inquiries so it is left to former police inspector Simon Brenner now retained by an insurance company to look into the deaths. If anyone in Zell thinks there is anything untoward about the deaths, no-one is talking and by the following September Brenner has got nowhere, nor has he sent in his report to the insurance company. Impasse. And he is being pestered by the annoying cub reporter Mandl from the local newspaper for news of some sort, any sort. But then during Brenner's chance observation of a game of curling (yes, curling, as seen on TV at the Sochi Winter Olympics) someone suggests Vergolder Anstetter, local rich businessman and son-in-law of Ted and Suzanne, as the most likely suspect. But Anstetter was given an alibi by his nephew Lorenz, so when Brenner hears that Lorenz who has been in jail is due to be released, he prevails upon one of the locals, the woman known as the Handless Frau, to drive him to the jail only to find when they get there that Lorenz has already been collected by his uncle Anstetter. So what did happen on that freezing December night, and how does that tie in with a terrifying explosion at the petrol station where Lorenz works?

This book is written in a chatty loquacious style which reminded me, a little, of Damon Runyan. The solution to the deaths of Ted and Suzanne, which reaches far back into their pasts and that of Anstetter and the Handless Frau and also that of Lorenz is actually quite satisfying when you get to it but the reader has to wade through a lot of playful and deliberate obfuscation, although the book itself is quite short, to get to it.

The author has written seven books in the Brenner series which have won prizes while three of them have been adapted into major German language films. Two other Brenner titles translated into English by Annie Janusch are Brenner and God and The Bone Man.
------
Reviewer: Radmila May

Wolf Haas was born December 14, 1960. in Maria Alm am Steinernen Meer, which is part of the Austrian province of Salzburg.  After university he worked as an advertising copywriter. Between 1996 and 2003 he wrote seven detective stories, of which six featured detective Simon Brenner. Three were made into films: Komn, suber Tod (Come Sweet Death), Silentium! and Der Knochenmann (The Boneman). He has won several prizes for his works.