‘The Intercept’ by Dick Wolf 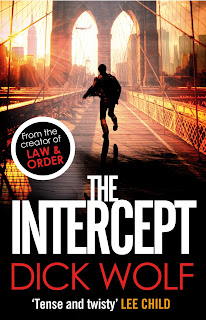 Yes, it’s by Dick Wolf, yes, it’s the name you see on your TV screens after you have sat for an hour enthralled by an hour of Law and Order, and yes, this is better than good!

When five passengers and a stewardess foil the hijacking of a commercial plane on route to New York, ‘The Six’ become instant celebrities, hailed as heroes for their bravery.  But NYPD investigator Jeremy Fisk suspects that there is more to come.

The story trails Bassam Shah as he drives from Denver to New York, a small cog in potentially devastating wheel of misfortune. We also follow the lives of  the ‘Six’ initially thrilled to be hailed as heroes, they don’t enjoy having their liberty restricted. They have great TV interviews, and plenty of media attention, but the downside of being famous, is that they don’t seem to be able to go home!

Jeremy Fisk knows that the enemy is out there, and he is getting closer, but from which direction is he coming and where will he strike.

A quite brilliant piece of writing, as the suspense rises to an unbelievable level.  I was totally absorbed, and although I suspected that there would be twists and turns, I was unprepared for the direction from whence the final twist came. Don’t miss this great book!
------
Reviewer: Lizzie Hayes 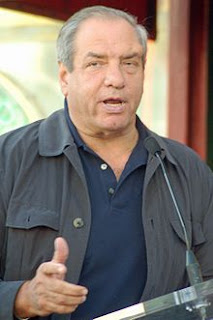 Dick Wolf  Richard Anthony "Dick" Wolf (born December 20, 1946) is an American producer, specializing in crime dramas such as Miami Vice and the Law & Order franchise. Wolf attended the University of Pennsylvania. After graduation, he launched a successful career in advertising; he wrote and produced over 100 TV commercials and penned the slogans "You can't beat Crest for fighting cavities" and "I'm Cheryl, Fly Me" for National Airlines.
Throughout his career he has won several awards including an Emmy Award and a star on the Hollywood Walk of Fame.
He started his television career in 1985, when he joined NBC's Hill Street Blues team as an executive script consultant and stayed through the show's final season, earning Emmy and Writer's Guild nominations. In 1988, Wolf formed his own television production company, Wolf Films, which produces Law & Order and its many spinoffs. Wolf has also produced films such as School Ties, No Man’s Land and Twin Towers
Posted by Lizzie at 16:08