‘Rage Against the Dying’ by Becky Masterman

What does a retired FBI agent do when something in her past starts to catch up with her? In Brigid Quinn’s case, the answer certainly isn’t keep walking the dogs and making the meatloaf with the new husband she adores.

By chapter two of this high-octane thriller, Brigid is knee-deep in an old serial killer case which has haunted her for years. It has suddenly sprung back to life after a lull of several years, and a smart young agent who reminds her of herself thirty years ago convinces her that it’s going in the wrong direction.

Soon Brigid is in over her head; dogs, meatloaf, even marriage fall victim to the instincts and hardwiring that made her the best when the Bureau was her life. She is the only one who sees that, despite overwhelming forensic evidence, something is seriously amiss with the investigation.

Then a suspect dies, and the task becomes even harder.

It’s the nature of thriller fiction that good will triumph against the odds; here, those odds are stacked sky-high against Brigid right from the start, and the roller-coaster tension hardly eases up at all. But she is well up to the task. Female protagonists of a certain age are thin on the ground in crime and thriller fiction, and capable, inventive 50+ Brigid makes a refreshing change from feisty young detectives and indefatigable action heroes.
Masterman portrays her warts and all, and she leaps off the page and makes you root for her. In fact, the cast of varied and three-dimensional characters is the novel’s great strength – that and the inhospitable Arizona landscape and climate, which come complete with tarantulas, coyotes, searing heat and flash floods when half the annual ten inches of rain falls within an hour.

The novel is Masterman’s debut, though it emphatically doesn’t show. She writes with an assurance which many more experienced authors lack, and has created a sizzling page-turner which left me hungry for more. Brigid Quinn is a role model for women of a certain age everywhere!
-------
Reviewer: Lynne Patrick 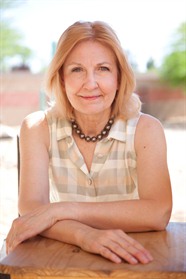 Becky Masterman is the acquisitions editor for a press specializing in medical textbooks for forensic examiners and law enforcement. She grew up in Fort Lauderdale, Florida and received her MA in creative writing from Florida Atlantic University.  Becky lives in Tucson, Arizona, with her husband. Rage Against the Dying is her first thriller.