‘The Windermere Witness’ by Rebecca Tope 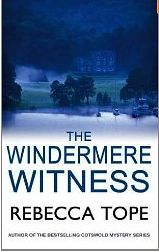 Persimmon 'Simmy' Brown has moved to the Lake District and opened a florists, Persimmon Petals. Despite recent personal upheaval and her rather eccentric parents who run a B & B Simmy is finding it good to be living nearer to them. And being retained to provide the flowers for the wedding of a millionaire's daughter should ensure even more business. So things are going well.

But Simmy has hardly got back to the shop after arranging the flowers at the wedding venue before hearing the news of the death of the bride’s brother Mark Baxter.  As Simmy had spoken to Mark just as she drove away form the hotel, both the police and the family want to speak with her.  Simmy feels she has little to tell them, but in their grief and a desire to understand how he came to die Simmy finds herself drawn into the lives of family. And, what a family! It’s a hot bed of secrets and scandals.  As Simmy becomes reluctantly more immersed in their lives she also begins to wonder about the marriage of the young Bridget to a man twenty-five years her senior, and more perplexing the fact that he is always surrounded by a close-knit group of bachelor friends, who show no sign of leaving the newly weds alone.

A further death pulls Simmy even further into the lives of the Baxters, and despite trying to distance herself she becomes even more involved in their lives, and convinced that one of these friends is the killer. But which one?

This is my favourite type of mystery - a really good ‘whodunit’?  I have actually never thought of the role of a florist, but there is one lovely passage that gave me food for thought, when Simmy says that people send flowers out of love, congratulation, apology, welcome, sympathy and romance, and she sometimes wondered why everybody wasn’t a florist.  I agree.  Reading this book I got to wish I had been a florist!  Highly recommended.
------
Reviewer: Lizzie Hayes 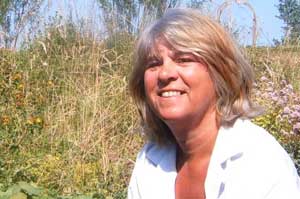