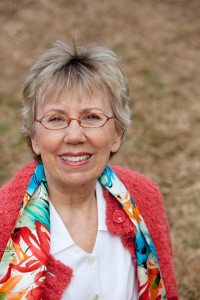 Karen Pullen grew up in Riverton, New Jersey and moved to St. Petersburg, Florida when she was 16. In college she majored in math which she then taught for two years: teaching, she says, is the hardest most exhausting job in the world.
After having a family she decided to train for a different job, and went back to school to earn a PhD in operations research. Five years later, she took a job with a systems engineering consulting firm in the Boston area. After her youngest child graduated from college, she left her job, intent on a major life change, and moved to a small town in North Carolina where she opened a bed and breakfast. Harvard Extension offered a class in the short story, and she got hooked on the challenge of writing fiction.

Q Karen, your book Cold Feet was published in January 2013 – Congratulations. The bookfeatures undercover drug agent Stella Lavender. Can you tell us something about  her?
A Stella is 26; she works for the North Carolina State Bureau of Investigation. Stella went into law inforcement because her mother’s abduction and disappearance, which happened when Stella was five years old, is an unsolved crime. She was raised by her grandmother Fern, studied criminal justice at NC State, was planning a wedding with an SBI researcher until he cheated.  She’s attracted to the detective that she works with but, to confound matters, he’s married. Her current job is buying drugs undercover.  It’s a dangerous job that becomes complicated when Fern takes up with a cocaine dealer.  Unwittingly, of course.

Q Is Cold Feet your first novel? How long did it take to write it?
A It’s my first published novel. An earlier one sleeps in a drawer. Cold Feet took two years to draft and revise, revise, revise. To get it in print took much longer.

Q Why the SBI, and not a police force or some other branch of law enforcement?
A I couldn’t find any mysteries with an SBI sleuth, so I thought the SBI would be an original choice. Also, a main character who could travel anywhere in the state would give me more flexibility in sequels. I went through official channels and found someone to answer questions, but I didn’t talk with any working SBI agents until I read a newspaper article about a woman who’d recently retired from the SBI after 30 years.  Very luckily, she’d worked undercover buying drugs!  She gracefully answered many naive questions.

Q Cold Feet’s title traditionally means someone is having second thoughts about a decision, like marriage. Many of your characters are dubious about the institution.
A The topic of marriage is fascinating in a novel – so much potential for conflict! Not only interpersonal conflict, but financial, cultural, legal. And weddings provide a perfect situation for a murder mystery.  Lots of potential suspects because family, friends, and perhaps enemies are gathered in one place for a day or more.  Feelings are heightened by memories, old secrets, newer struggles, and possibly unhappiness with this particular couple’s marriage. All the ingredients for a colorful emotional stew

Q You own and operate a bed-and-breakfast. Do you use that experience in your fiction writing?
A Occasionally I’ve been inspired (not in a good way) by the rare painful guest. Innkeepers will know what I mean. Nice people don’t make good fiction; conflict does. There are two fictional B&Bs in Cold Feet; an upscale faux Scottish castle and a peeling-paint Victorian. Since I know how B&Bs operate, it was easy to create scenes in them, and to understand one innkeeper’s anguish when someone begins to sabotage his business.

Q One of your characters is transsexual. How did you happen to write about her?
A It fascinated me that some individuals are aware from a very young age – around three – that they have been assigned the wrong gender. It’s more common than you’d think. Can you imagine the despair, the struggle, the loneliness of that boy or girl? Cold Feet’s transsexual character is flawed and not necessarily sympathetic, but I tried to convey the drive and desperation that motivated her to alter her sex.  And I hope that the character is realized as a whole person, not defined solely by her gender change

Q When you sat down to write a novel what area did you find most challenging?
A Originally I chose the mystery genre because it had a framework on which I could hang any characters, themes, settings, conflicts.  I thought that a skeleton would make the writing easier. But a traditional mystery is actually very difficult, because there are so many elements that have to work just so.  Pacing is important:  revealing clues and red herrings to pull the reader along, keep her guessing. Plots and subplots must be resolved. One serious challenge that I didn’t realize until well into it was that the most dramatic scene – the murder – happens right at the beginning.  That’s the opposite of all those “rising action” plot diagrams you see.

Q. Is Cold Feet, the start of a series?
A Yes, I plan at least two more Stella Lavender books. I’d like her to solve the mystery of her mother’s
disappearance. And there are plenty of drug dealers still to arrest.

Q Who are your  favorite mystery writers?
A This is a terrible question because I hate to leave anyone out, and there are so many wonderful writers in the mystery genre! I enjoy the books of Julia Spencer-Fleming, Hank Philippi Ryan, Deborah Coonts, Beth roundwater and Nevada Barr. Dennis Lehane, George Pelecanos, James Lee Burke, and Craig Johnson are fun to read. The British crime writers Ruth Rendell, Susan Hill, and Kate Atkinson are royalty in my mind; their pictures are tacked to my bulletin board for inspiration. Ken Bruen is brilliant, and I love to read Benjamin Black for the language

Q So what’s next Karen?
A I’ve started another Stella Lavender mystery, and would like to publish a short story collection