‘Wine of Violence’ by Priscilla Royal 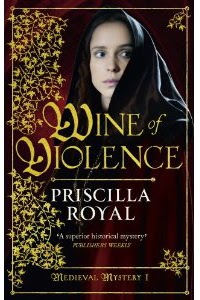 Following the death of prioress Felicia in the summer of 1270, twenty-one-year-old Eleanor of Wynethorpe is appointed prioress by King Henry III. A political move that pleased the family, but not the monk and nuns of Tyndal Priory, which belongs to the Order of Fontevraud, where monks and nuns live and work in close proximity.

Within a day of her arrival Eleanor is apprehensively aware that she has usurped the order’s elected choice, Sister Ruth. Then the one person who had welcomed her, and who she had seen as a support is found dead in the cloister gardens.  As a replacement Brother Thomas is brought in to act as crowner.  Brother Thomas has a secret that has changed his life and left him in mortal fear of discovery.

So the young inexperienced Eleanor has to tread a careful path attempting to gain the respect of her resentful flock, and unmask a violent killer, whilst trying not to totally alienate Prior Theobald who had incorrectly assumed headship of Tyndal Priory whilst prioress Felicia was alive.  But another death brings great pressure to bear on the new prioress.

I absolutely loved this book, and I didn’t expect to, as I am not a huge fan of historical crime. But I have just become a huge fan of medieval mysteries.  I was totally drawn into both the time and the characters. This has to be attributed to the writing.  I was gripped from the beginning.   I found the foreword in the book very useful as it enabled me to enjoy the story without struggling with some of the terms which I would possible have done without the foreword.

For a book collector of fifty years I must pay tribute to the publishers Head of Zeus.  The book itself as an object is a joy. Beautifully presented it is a book to keep and cherish.
-------
Reviewer: Lizzie Hayes
Priscilla Royal was born in Seattle, and grew up in British Columbia. She has a degree in world literature from San Francisco State University, where she discovered the beauty of medieval literature. She is a theater fan as well as reader of history, mysteries, and fiction of lesser violence. Until 2000, she worked for the Federal government in a variety of positions, all of which provided a wonderful education in the complexity of human experience and motivation She lives in Northern California and belongs to the California Writers Club and Sisters in Crime.