‘Murders Most Foul’ by Alanna Knight 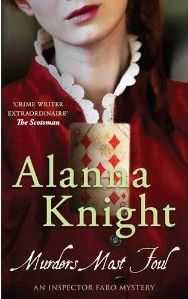 Fleshers Close in Edinburgh had attained notoriety some forty years ago by association with serial killers Burke and Hare.  Now here in 1861  Detective Constable Faro is looking at the body of a young woman as he waits for the mortuary van. In the surrounding tenements no one saw anything!

It is assumed to be a random act of violence, until Faro finds a single playing card under the body – the nine of diamonds.  But Inspector Wade is dismissive and Detective Sergeant Gosse openly hostile, but then Faro and Gosse have history.

Some days later an elderly man is attacked. As it was assumed by Wade and Gosse that the dead girl founds days earlier was a prostitute, they do not consider any connection with this crime, but the nine of diamonds is found in the man’s pocket.

Faro is walking out with Lizzie Laurie, a servant girl who has raised herself up from humble beginnings and is deeply in love with Faro. But Faro’s heart still remains in his native Orkney with Inga St Ola. When a servant at Lizzie's place of work goes missing, Lizzie reports it to the police causing trouble for herself with both her employer and with Faro.

The mystery is intriguing, as are the many facets of the characters. All have something to hide, and many much to lose.  Apart from Faro it seemed to me that they all lived in fear, even those who looked secure on the outside live with the knowledge that at any moment their prized security could be ripped away from them.

Just what is the significance of the nine of diamonds?  And how does it link to a servant girl and an elderly retired boxer Evoking the period vividly, with some interesting references to the many legends of ’The Curse of Scotland’  Knight weaves a fascinating tale of murder and revenge.
Highly recommended.
-------
Reviewer: Lizzie Hayes 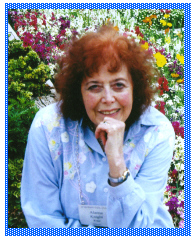 Alanna Knight published her first novel in 1969 and has been writing ever since. She is the author countless novels, short stories and even plays and her work includes three historical crime series – the Victorian detective Inspector Faro series, her Rose McQuinn series (featuring Faro’s daughter) and her intrepid time-traveller Tam Eildor series.
She is also an authority on Robert Louis Stevenson, a founder member and official of Scottish Association of Writers, and a regularly at Edinburgh International Book Festival. She lives in Edinburgh