‘The Vanishing Point’ by Val McDermid 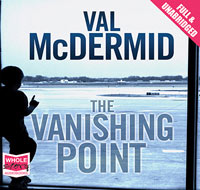 Travelling from Heathrow to the USA Stephanie Harker passing through the airport security checkpoint at O’Hare airport in Chicago is helpless as she watches a man abductfive-year-old Jimmy Higgins. Although his guardian, Stephanie is not Jimmy’s mother, but the son of reality TV star Scarlett Higgins.

The next section of the book is the story of how ghost writer Stephanie Harker became friends with Scarlett, told in flashbacks as Stephanie is interrogated by the FBI Agent assigned to direct the recovery of the missing boy.  As the story progresses several possible lines of enquiry come to light.  Could it be Stephanie’s ex lover Pete, who has been stalking her since they split up determined to get her back.  Or Scarlett’s mother and sister, with whom she has long been estranged?  Or one of Scarlett’s many obsessed fans?

It is an interesting story mirroring in many ways the life of the late Jade Goody, as reported in the press. It is not until one is 90% through the book that the pace picks up.   And although I had guessed the culprits, there is an amazing twist at the end that is so Val McDermid.  Although all the clues are there it was still a surprise, and I loved it.

There is no doubt that Val McDermid is a brilliant writer, and fans of Val’s will love this non-series book.

Antonia Beamish brought much to the story particularly her portrayal of Scarlett.
------
Reviewer: Lizzie Hayes 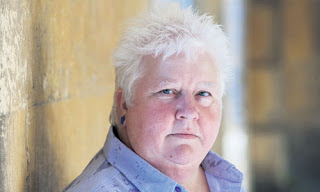 Val McDermid grew up in Kirkcaldy on the East Coast of Scotland. She read English at St Hilda’s College, Oxford. She worked on national newspapers in Glasgow and Manchester, ending up as Northern Bureau Chief of a national Sunday tabloid. Val’s first book Report for Murder  was published in 1984, In 1991 she gave up the day job and has been making my living by writing ever since. She was the Manchester Evening News‘crime reviewer for four years, and still review regularly for various national newspapers. She also writes occasional journalism and broadcast regularly on BBC Radio 4 and BBC Radio Scotland.

Antonia Beamish After a successful period with a French circus company Antonia Beamish was awarded a scholarship to study drama in America. She stayed in New York and performed off Broadway before touring the with Moliere's Tartuffe before returning to the UK to play the lead role in Educating Rita. Antonia Beamish has won the Best Actress Award at the Calgary International Festival of Horror, and also performs extensively for radio.