‘The Sons of Jude’ by Brandt Dodson 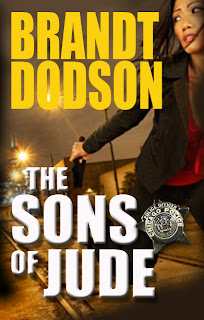 When Detective Frank Campello returns to work at the 28th district following the death of his partner, the new partner assigned to him is Detective Andy Polanski.   Andy Polanski has been re-assigned from the 31st district, having brought allegations against two other police officers Andy Polanski is the most unpopular cop in Chicago.

Before Frank has time to drive home to his district commander Julio Lopez his displeasure at this ture of events, he is called out to the discovery of a body at Navy Pier.

Journalist Christie Lee has the opposite view of Andy Polanski, Too long aware of uniform cops on the take, Christie thinks that Andy is a hero.

The murder of Trina Martinez at first glance looks to be an ordinary homicide. An unfortunate young girl in the wrong place at the wrong time, but the investigation takes them to places people don’t want them to go.  Soon they are in the vicinity of Alderman Aaron Green, a man with powerful connections.  Whilst Frank Campello is anti Andy Polanski, not liking what he has done, they have one thing in common they are both good cops.  As they find their investigation halted by a wall of silence, they team up with Journalist Christie Lee, but are they enough to stem the corruption in high places?

Saint Jude is the patron saint of lost causes – and police officers. And two lowly detectives and a journalist look like a lost cause as they come up against the power and mite of people in high office who have a lot to lose.  Then they enlist the support of reporter Christy Lee. As they are undermined and threatened, Campello and Polanski are The Sons of Jude. Can they overcome?

A fast-paced thriller with an moral twist.
------
Reviewer: Lizzie Hayes

Brandt Dodson was born and raised in Indianapolis, where he graduated from Ben Davis High School and, later, Indiana Central University (now known as The University of Indianapolis). It was during a creative writing course in college that a professor said, "You're a good writer. With a little effort and work, you could be a very good writer." That comment, and the support offered by a good teacher, set Brandt on a course that would eventually lead to the Colton Parker Mystery Series.  Brandt comes from a long line of police officers, spanning several generations, and was employed by the FBI before leaving to pursue his education. A former United States Naval Reserve officer, Brandt is a board Certified Podiatrist and past President of the Indiana Podiatric Medical Association. He is a recipient of the association's highest honor, "The Theodore H. Clark Award". He currently resides in southwestern Indiana with his wife and two sons
Posted by Lizzie at 11:47