‘Heart of the Demon’ by Michael Fowler 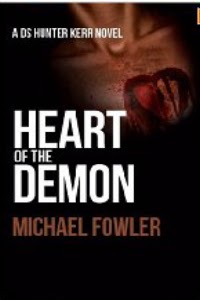 Published by Caffeine Nights, 2012. ISBN: 978-1-907565-26-7
The body of a 14 year old school girl, Rebecca Morris, is discovered in a derelict farm by a thief hoping to steal some stonework.  The body has been mutilated, a playing card lying on her chest and slashed in her torso the letters IIV and the number 3.  Gradually as time unfolds, so does the realisation that Rebecca is not the first, nor will she be the last unless DS Hunter Kerr and his team find the killer.

Whilst this is about a serial killer, this is not the standard gorefest which they can degenerate into, nor is it a psychological exposure intended to create allowances for the killer.  The motivation and the killer’s backdrop serves only to give some rationale for his behaviour, not an excuse.  I find this nicely counterpoints the clinical way in which some of the narrative is written, which at times seems to mirror the style of a police report.  This enhances the writing about thoughts and behaviours and creates a more real impact for the storyline, along with making some of the individual dialogue appear more realistic.

This is the first of a series starring DS Hunter Kerr and his team.  It is a complex and detailed police procedural which is written by an ex-police officer and it shows.  The plot is intricate, the details of the crime are thoroughly sketched in eloquent words and the narrative moves between the past and the present.  This is sometimes a clumsy way of introducing the killer and his history, but in this case it enhances the plot and does not give away who the murderer is.  The clues stack up, but whilst the reader has more information than DS Kerr and his colleagues, they too are following the narrative not ahead of it.

Michael Fowler has written a meticulous book, with style and good characters.  The key police force members are well drawn, as are some of the supporting characters which give the story depth, sometimes missing in a police procedural.  This is a good introduction to the characters and I will be looking out for the next in the series.
-----
Reviewer: Amanda Brown

Michael Fowler was born in 1957, in Rotherham, and grew up in the once industrial heartland of South Yorkshire where he still lives with his wife and two sons.  He served as a police officer for thirty-two years, both in uniform and in plain clothes, working in CID, Vice Squad and Drug Squad, and retired in 2006 in the rank of Inspector, finishing his career in charge of a busy CID department. He now writes and paints full-time.
Posted by Lizzie at 13:32