‘The Crime of Julian Wells’ by Thomas H Cook 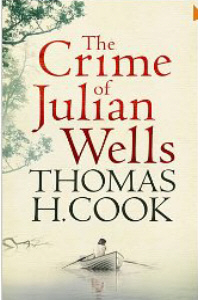 I found this a moving and insightful book.

The story opens with the death by his own hand of Julian Wells, a writer, who explored through his writing the crimes of man against his fellow man in the twentieth century.  Asked by Julian’s sister to give a eulogy at Julian’s funeral, Philip Anders, literary critic and Julian’s best friend, looks back over his friend’s life, and in doing so becomes convinced that his friend had a secret, and that maybe it was because he was haunted by a crime he had committed that he ended his life.

And so Philip Anders sets out on a journey to revisit the places that Julian visited to attempt to uncover the mystery.  It is a journey that spans several decades and takes him to Paris, South America and Spain. He has few clues, as in all good mysteries, he picks up clues along the way.  As he becomes immersed in his investigations he relives conversations with Julian and wonders if he knew him at all.  He is also plagued by the belief that had he been a better friend he could have prevented Julian’s death.

This is the story of an intelligent, clever and complex man, whose introspection and desire for experience, knowledge and understanding takes him to dark places. And equally, as we learn through Philip about Julian, Philip is revealed.

As the story progresses, the reader is directed to certain conclusions, but the ending is unexpected and has horrific implications. It will give pause for reflection long after the last page has been turned.  Highly recommended.
------
Reviewer: Lizzie Hayes