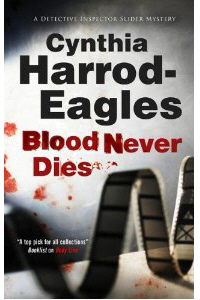 On a hot August day Inspector Bill Slider of Shepherds Bush police station, is called to an unexpected death in an attic room in a Victorian terraced house just off the Uxbridge Road. Here he finds the body of a man in his early thirties dead in his bath.  At first taken as a suicide Slider is not sure, as they can find nothing to identify the man.  The name Robin Williams under which he rented the room proves false.

This is a fascinating and intriguing mystery, just who and what was the mysterious Robin Williams.

We meet again with the elegant fastidious Detective Sergeant Atherton, slider’s sidekick and friend;  and always a delight is Slider’s boss Detective Chief Inspector Fred ‘The Syrup’ Porson he of the famous malapropisms. An old-fashioned copper who dislikes meetings, hates politics and is allergic to golf.  Bald with shaggy eyebrows no one ever invites him to a brainstorming breakfast meeting.  When Slider brings him up to speed on the case he growls. ‘A case of walking your chickens before they can run, if you ask me’

After a couple of days when all the leads seem to present even more questions, Sliders morning report to Porson brings forth ‘Well, feelings are in the eye of the beholder’ What lines are you pursuing?

Well plotted with a satisfactory conclusion, a Cynthia Harrod-Eagles book featuring Bill Slider  is always a joy and this one does not disappoint only when I turn the last page and wonder how long I will have to wait for the next one.
-----
Reviewer: Lizzie Hayes

Cynthia Harrod-Eagles was born in Shepherd's Bush in London. She was educated at Burlington School, a girls' charity school founded in 1699, and at the University of Edinburgh and University College London, where she studied English, history and philosophy. She wrote her first novel while at university and in 1972 won the Young Writers' Award with The Waiting Game. Afterwards she had a variety of jobs in the commercial world, beginning as sales manager for the Coca Cola Company in Edinburgh, and ending up as pensions officer for the BBC in London, while writing during the evenings and weekends. The birth of the MORLAND DYNASTY series enabled her to become a full-time writer in 1979. The series was originally intended to comprise twelve volumes, but it has proved so popular that it has now been extended to thirty-four. In 1993 she won the RNA Novel of the Year Award with Emily, the third volume of her Kirov Saga, a trilogy set in nineteenth century Russia. Cynthia Harrod-Eagles still lives in London, has a husband and three children, and apart from writing her passions are music (she plays in several amateur orchestras) horses, wine, architecture and the English countryside.