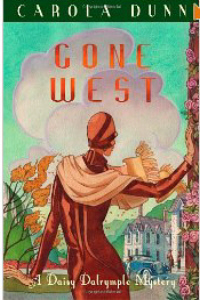 For the Honourable Daisy Dalrymple, as for most of her generation, The Great War had a profound effect on the course of their future lives.  Daisy's only brother and her fiancé had died in the War.  Her father had died in the influenza pandemic of 1919 and the Dalrymple estates and title passed to a distant cousin.  Rather than live as a dependant in her old home or in the Dower House with her demanding mother, Daisy set out to earn her own living by writing for magazines, articles about great houses and historical traditions.

Daisy's scheme to pay her own way is successful and her friendship with many important and noble families means that she always has somewhere new to write about.  There is just one flaw in Daisy's new life… wherever she goes she encounters someone who has died by foul play, and what else can she do but investigate?  Fortunately the long-suffering Detective Chief Inspector Alec Fletcher of Scotland Yard is always assigned to the case to attempt to control Daisy's curiosity.

Gone West is set in September 1926 and Daisy is now married to Alec Fletcher, the mother of young twins and stepmother to Alec's daughter.  In this book, Daisy travels north to a remote farmhouse in Derbyshire at the plea of an old school friend, Stella Sutherby.  Stella is the secretary to Humphrey Birtwhistle who, under a pseudonym, is a successful writer of Western adventures. Daisy soon realises that, since Humphrey's life-threatening illness three years previously, Sybil had been writing his books, with a lot more commercial success than he had achieved himself. Humphrey still provides the plots and they are still published under his pen name.  All of Humphrey's family benefit from Sybil's success and Daisy begins to suspect that someone amongst them is deliberately keeping him in ill-health.  When Humphrey dies unexpectedly it seems unlikely that anyone close to him would have a motive to kill him.  Then Daisy starts to probe and Alec and his men are sent to investigate.

Gone West is the twentieth book in the Daisy Dalrymple series.  I found the title particularly interesting.  Gone West obviously refers to the sort of books written by the victim, which forms part of the motive for the crime, but 'gone west' is also a slang term, used since the 16th Century, to indicate someone has died.

The Daisy Dalrymple books are the ultimate cosy crime comfort read.  However there is a hint of the reality of the time that gives the series credibility.  Many of the books feature young men who have been maimed physically and mentally by the First World War, and young women who have been left as spinsters because of the loss of so many of their male contemporaries.  It also shows the first breakdown of the rigid social order when respectable young women started to work in jobs that had been regarded as only suitable for men.  Also many girls married men from a different class because so many of their own 'type' have died.  This was what Daisy did when she married into the middle-classes.  It is particularly poignant that Daisy feels isolated in her grief for her fiancé because he was a conscientious objector, even though he died courageously in the trenches, as a stretcher-bearer rescuing wounded men.

The Daisy Dalrymple books are warm and entertaining, with interesting plots, and above all great fun.  Gone West is a very enjoyable read.
-----
Reviewer: Amanda Brown 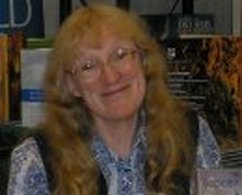 Carola Dunn was born and grew up in England. After graduating from Manchester University, she set off around the world, but only made it halfway, to Fiji, before turning back to get married. She lived in Southern California for 20 years, and then moved to Eugene, Oregon, where she now lives. She is the author of over 50 books: 20 mysteries in the Daisy Dalrymple series, set in England in the 1920s; a new series set in Cornwall in the 1960s, and 32 Regencies, not counting numerous novellas.
Posted by Lizzie at 22:16