‘Beneath the Daisies’ by Jayne-Marie Barker 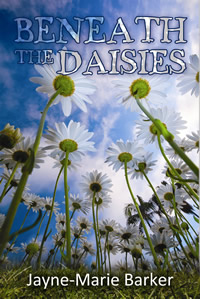 This is an interesting debut in mystery fiction by Jayne-Marie Barker. The heroine in the present day is Sophie Harris who has inherited a house form her grandmother and is busily moving in. She hires a handyman, Andy, who is a handsome and charming man. Unfortunately his digging in the garden produces an unpleasant result - two skeletons. It is quickly established that these bodies date to the mid1930s and Sophie wonders if her own family have a secret murderer!
Sophie is threatened as a result of the discovery and wonders who she can trust. The characters are effectively described and the background of Sophie’s work is particularly well shown. Entries from the diary of a woman from the 1930s are interspersed with the present day events to build up towards the climactic discovery of the truth.

Jayne-Marie Barker was born in May 1981, Jayne-Marie grew up in Suffolk. Following the achievement of her OCR RSA Diploma in Administrative and Secretarial Procedures in the summer of 1999, aged eighteen, she moved to Hertfordshire. Currently working as Personal Assistant to the CEO of one of England's leading tyre retailers. Aside from writing her other passion in life is dance, and she belongs to two weekly classes; one being Ballroom & Latin and the other Brazilian Carnival Samba. Her passion for dance is such that she has passed exams in Ballroom, Latin, Salsa and Argentine Tango, and can now proudly call herself an amateur member of the IDTA.
Her debut novel, Beneath The Daisies, was inspired by a dreamless nights idle thought. It was with an inkling of promise that I began the work in 2006 and since revised it three times into its current shape. Any writing success I achieve is largely thanks to my consistent desire to write and my ever-supporting family, who I never wish to be without.

Jennifer Palmer. Throughout my reading life crime fiction has been a constant interest; I really enjoyed my 15 years as an expatriate in the Far East, the Netherlands & the USA but occasionally the solace of closing my door to the outside world and sitting reading was highly therapeutic. I now lecture to adults on historical topics including Famous Historical Mysteries.