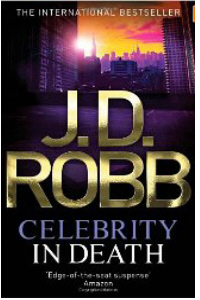 With the filming of Nadine Furst’s book, Lieutenant Eve Dallas, homicide cop finds herself thrust into the film world, as the book is based on one of her famous cases.  Whilst her partner Detective Peabody and several other members of the police force are tickled to meet and see the actors portraying them Eve is in panic mode when she is invited to dinner at the swank residence of the hottest director in Hollywood.  Mixing with the rich and famous is not her thing.

Happily the evening is not a totally write-off as someone offs one of the stars.  There is not surprisingly, a huge cast of characters, and even initial investigation produces a host of suspects as it appears that everyone disliked the victim profoundly, and some digging by Eve produces plenty of motives.

Whilst a good mystery, with many twists and turns, as with the other books in the series there is plenty of hot sex scenes with her husband reformed bad boy billionaire Roarke - he does sound rather gorgeous!

With some nifty police work Eve does nail the killer but not until the body count has risen and there have been some hair-raising moments. A good entry in this futuristic series set ca 2060.
-----
Lizzie Hayes

Nora Roberts (writing as J D Robb), was born in Silver Spring Maryland, the youngest of five children.  She published her first J D Robb novel featuring homicide cop Eve Dallas in 1995.  Since that time she has published 34 books in this series. Nora is a member of several writers groups and has won countless awards from her colleagues and the publishing industry