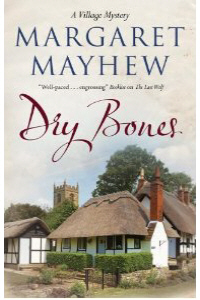 The Colonel has now been living in the peaceful village of Frog’s End for eleven years following the death of his beloved wife Laura.  After battling rising damp, death-watch beetle, rotting thatch and general decay, he had finally got the cottage just how he liked it.  With the cottage, to complete the picture had come Thursday the cat, named aptly as he had appeared on a Thursday.

A letter from Cornelia, an old friend of his late wife, professing that she needs his help as her husband Howard is away on business and that something horrible has happened, intrigues the Colonel and so leaving his garden and Thursday in the capable hands of his neighbour Naomi, the Colonel sets off to Wiltshire to give what assistance he can to Cornelia.

When Cornelia presents the Colonel with her ‘horrible problem’, he is shocked to realise that she has done nothing about it for several days and admonishes her to take action, but it is clear that Cornelia prefers to wash her hands of the matter, and so the Colonel realizes that it’s down to him to sort things out. After reporting the matter to the police, he sets off to do some investigating.

The village of King’s Mowbray clearly has some wealthy inhabitants - Cornelia’s house is all plate glass and polished wood, designed, Cornelia informs him proudly by the Danish architect Hans Birger.  But it still has all the hall marks of the English village the Colonel has come to appreciate, gossiping in the village shop, the general nosiness of the residents, and the amazing jungle telegraph.  A trip to the village for his paper and  soon the Colonel begins to get a handle on Cornelia’s problem – can he resolve it?

A true English village mystery.  I was enthralled from the first to the last page, by the marvellous characters and the prose. Margaret Mayhew is a true storyteller.
-----
Lizzie Hayes

Margaret Mayhew was born in London and her earliest childhood memories were of the London Blitz. She began writing in her mid-thirties and had her first novel published in 1976. She is married to American aviation author, Philip Kaplan, and lives in Gloucestershire.
Posted by Lizzie at 13:10