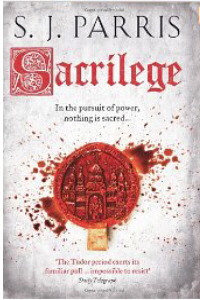 S. J. Parris blends fact and fiction in another excellent book featuring the Italian, Bruno Giordano, a real-life character who was a monk and philosopher. In fact he was eventually executed for his unorthodox beliefs but he did spend two years in England and travel to Oxford. There is a suggestion that he worked for Walsingham, Elizabeth I's spy master in the1580’s. This was a time of anti-Catholicism and threats of war, Elizabeth had been excommunicated by the Pope, who offered papal approval to any one who assassinated the queen.

This book is well researched, a solid novel with plenty of period detail and excellent plotting. The pace is gentle but not too slow.

Bruno feels he is being watched as he delivers his book to the printer. On the way home he meets Sophia Underhill, the independent, educated girl he fell for in the second novel, Heresy. She is disguised as a man and on the run, accused of murdering her husband. Bruno, gallant as ever, comes to her aid and goes with her to Canterbury to clear her name. Meanwhile, Walsingham, Queen Elizabeth’s spymaster, has a job for Bruno, more catholic plots proliferate against her. Also involved are the superstitions and speculation around the story of St Thomas Becket and the Huguenots living in exile in Canterbury.

The town’s folk are suspicious, Bruno is a foreigner at a time when rumours of plague and imminent war abound. His only ally is the old Cathedral cleric that he stays with. Whilst Bruno is in Canterbury a number of brutal crimes take place, he is thrown into prison and secrets come to light. I don’t wish to reveal too much detail about this novel, to say more would spoil it for readers. There are plenty of well-rounded characters and action. Suffice it to say the ending has a twist and sets up the scenario for the next book in the series. I look forward to reading it
-----
Reviewer: Sue Lord

S J Parris  is the pen-name of Stephanie Merritt, a writer for the Observer and Guardian newspapers.  In 1996 she graduated from Cambridge with a degree in English. She has worked as a critic and feature writer for a range of newspapers and magazines including The Times, The Daily Telegraph, The New Statesman, New Humanist, and Die Welt. From 1998 to 2006 she was the Deputy Literary Editor of The Observer. She is the author of five novels: Gaveston (2002), Real (2005), and three Giordano Bruno books (as S.J. Parris), Heresy (2010),  Prophecy (2011), and Sacrilege. She has also written a memoir about living with depression, The Devil Within (2008. 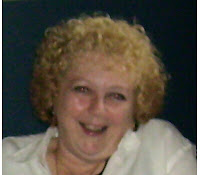 Sue Lord originally studied Fine Art and Art History, her MA is in Creative Writing. She now, reviews, teaches, mentors and script doctors. She lives in central London and Cornwall. Her favourite pastime is gardening.