‘The Gentleness of Steel’ by Anne Ludlow 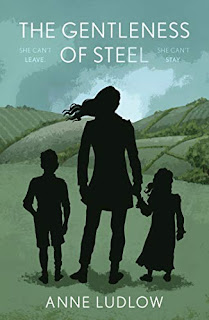 Eleven years ago, Adie had married William (Bill) Lewis. Prior to the marriage he had appeared kind and loving, but only a few weeks into the marriage he had revealed himself as being cruel and violent. But now, in 1965, not only has his behaviour towards Adie grown worse but he has begun to be violent towards their children, Sam and Lillie, and that Adie will not stand for. What can she do? The police are not interested; physical maltreatment of women was all too frequent, and all too often ignored by the police. Over the years Adie has put by as much money from her job as a cleaner as she can hide from her husband. And when she judges she has enough to fund her escape she takes the children and his car and sets off. But where? She spots an advertisement in a magazine called The Lady for a live-in housekeeper for a farmer in Cumbria far to the north, applies for it and is accepted.

Along the way, various people do help her; when  there is trouble with the car one of the mechanics at the garage she takes it to; a doctor at the hospital where she takes Lillie who has an asthma attack. And when she reaches the lonely farmhouse nestled among desolate fells, she and the children settle in with the support of the kindly farm manager Jack and his wife Vera and even the apparently gruff farmer himself, Thomas.

However, Bill is determined to get his wife and children back and pursues them, searching out every contact Adie has made, often with threats and violence, for he hears voices in his head telling him that Adie must pay for her disobedience. He tracks her down to the lonely Cumbrian farmhouse and waits, biding his time to attack her. But Bill himself is being followed; although most of the police to whom Adie has complained about Bill’s violent behaviour have ignored her,  one officer, Detective Inspector Laurence Appleby, is all too well aware of the all-too frequent violence shown by some men to their wives and believes that Bill was responsible for the death of another woman some years before although proceedings were abandoned. He will not allow Adie or her children to become victims of Bill’s desire for revenge.  Will Inspector Appleby succeed in bringing Bill to justice? An engrossing read.
--------
Reviewer: Radmila May
Note: It is a fact that domestic abuse was for many years not recognised as a specific problem and the necessity of providing a safe refuge for fleeing wives and their children was addressed by Erin Pizzey who founded the first Women’s Refuge. Sadly. although society is now aware of the problem and efforts are being made to improve matters, and there is now (2020)  a Bill going through Parliament on the subject, there are still violent men, vengeful husbands and fathers, who attack, even kill, their wives and children. 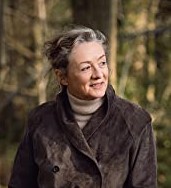 Anne Ludlow was born in the UK in 1956. In her late teens she began a nomadic lifestyle of several career's, and for a time lived abroad. This lifestyle was fertile ground for a future writer. Now, concentrating full time on writing, she lives with her husband in Kent.

Radmila May was born in the U.S. but has lived in the U.K. since she was seven apart from seven years in The Hague. She read law at university but did not go into practice. Instead she worked for many years for a firm of law publishers and still does occasional work for them including taking part in a substantial revision and updating of her late husband’s legal practitioners’ work on Criminal Evidence published late 2015. She has also contributed short stories with a distinctly criminal flavour to two of the Oxford Stories anthologies published by Oxpens Press – a third story is to be published shortly in another Oxford Stories anthology – and is now concentrating on her own writing.
Posted by Lizzie at 13:26