Murder on the Downs By Julie Wassmer 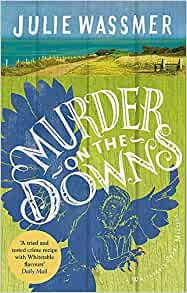 Murder on the Downs is the seventh book in the series featuring restaurant owner Pearl Nolan, set in Whitstable. Pearl’s reputation for good quality food has ensured the success of her enterprise and provided a steady income for her and her son Charlie.  But Charlie has now left for university and Pearl’s old ambition to become a detective has resurfaced and so seeking a new challenge she has set up Nolan’s Detective Agency.  This endeavour has brought her to the attention of DCI Mike McGuire of the Canterbury Police.  Over time their association has developed in a somewhat on/off relationship, the off bit being Pearl’s involvement in crime investigations, which tends to infuriate McGuire. As the book opens, Pearl and McGuire have taken a few days to enjoy an ‘on’ period.  But can it last?

The proposal of a new property development on the edge of the green open space of the downs, has upset the residents. A campaign ‘Save Our Downs’ has been waged headed up by environmentalist Martha Laker. News given by Frederick Clark, chairman of the Whitstable Preservation Society that they have lost their case, causes outrage. But Martha vows, we will fight on.

Many of the residents are aware that the only people able to afford the new housing will be DFL’s (Down From Londoners) not local people, and so the tensions between the developers and the residents grow.  Soon Pearl’s mother Dolly, and her son Charlie have joined the protesters. Further complication arise when one of the developers seeks out Pearl to put his point of view and asks for her help for the sake of the town.

When the local people decide to hold a pageant to celebrate their local green space and its history, at the behest of Martha Laker, Pearl agrees to help. DCI Mike McGuire is concerned that matters could soon spiral out of control, and so once again he and Pearl are on different sides.

The book is rich in characters, one being Pearl’s mother, the spirited Dolly, who holds an antipathy towards the police in general which until recently had extended to Mike McGuire, but their entente is fragile. Also keen on
Pearl is her fruit and vegetable supplier, eligible bachelor Marty Smith.  His feelings for Pearl do rather influence his outlook and in this book have consequences.

Later, while musing on the eventful day at the pageant, as Pearl searches on the downs for a missing earing which she assumes she had lost during the fracas at the pageant, she encounters Ben Tyler, a friend of Martha’s who had only recently appeared in Whitstable. Unfortunately, Ben isn't the only one she encounters as sitting at the observation table in the hide is a dead body.  As McGuire investigates both murders, the protesters set up camp.  With two people murdered,  Pearl is not unnaturally unhappy about Charlie and Dolly camping on the downs with the protest group.  Then there is a third murder that shocks the town.

Cleverly plotted, this is an intriguing mystery that had me perplexed right to the end. It has sharply defined characters, that leap off the page to you,  one of which is the lovely coastal town of Whitstable itself. After reading this book you will want to move there. Highly recommended.
------
Reviewer: Lizzie Sirett 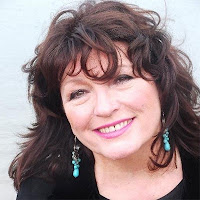