‘A Time to Die’ by Barbara Nadel 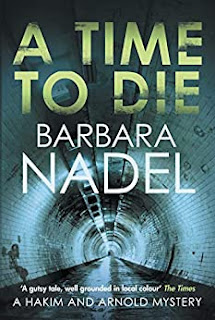 2019. President Trump is about to make his second visit to the UK and London is preparing to welcome him with massive crowds, mostly booing and jeering, and a huge baby-shaped balloon. Not that Mumtaz Hakim and Lee Arnold are, in this sixth instalment of their agency’s investigations, much concerned. They have other concerns. Mumtaz has been asked by Brenda Joseph (two marriages, seven children) to find out as much as she can about her brother John Saunders who, over 40 years ago, then aged 10, on his own entered the Woolwich Foot Tunnel which, constructed in 1912, runs under the Thames from North Woolwich to South Woolwich where Brenda was supposed to meet him. But he never reappeared despite a massive police search and for a while wild rumours circulated as to the reasons for his disappearance. Then he was largely forgotten. But now he has reappeared. It seems he surfaced in America and was adopted by an enormously rich childless couple, the Gustavssons, and is now the heir to all their wealth. His story about his disappearance is that his alcoholic father, estranged from his and Brenda’s mother, had met him in the tunnel and taken him on a ship to America. DNA evidence does establish that he is Brenda’s brother. All this is unlikely enough but, in that case, why come back to the UK, spend nights in a modest hotel but spend days in Brenda’s house, barely talking to his sister, her husband or her children. There’s something going on, but can Mumtaz find out what that something is?

At the same time, Lee has been hired by Jason Pritchard whose ex-wife Lorraine is claiming that their divorce settlement has left her virtually penniless. Not so, says Jason, but she has been spending money like water mostly on expensive items such as handbags and on much younger men whom she meets through dating sites for ‘quickies’. Jason is worried that she has been funding these activities through loan sharks and that the house which was settled on her as part of the divorce settlement is at risk. Even more serious, since despite the divorce, Jason does not wish Lorraine to come to any harm, he is worried about her being what could happen if the loan sharks turn vicious. Lee follows a trail which leads from dodgy second-hand car businesses to loan sharks to violent Maltese criminals. And there are some Albanians as well. What has Lorraine blundered into? And can Lee and her husband extricate her?

And then there are more developments. A man’s body is found in the sewers under Regent’s Park where the US ambassador’s residence where President Trump and Melania will be staying is situated. He died violently so Counter Terrorism is called in. There is a link between the dead man and members of Brenda’s family. And Mumtaz’s beloved stepdaughter Shazia and her posh boyfriend is coming down from Manchester University to take part in anti-Trump demonstrations. Could there be a link between the dead man and some of Shazia’s boyfriend’s associates?

All this is woven skilfully together in a way which makes the narrative totally gripping, and seethes above the account of Brenda’s mysterious brother John while he moves purposefully towards the accomplishment of his secret aim. Will he accomplish it? Highly recommended.
------
Reviewer: Radmila May

Barbara Nadel was born in the East End of London. She rained as an actress, and used to work in mental health services. She now writes full time and has been a visitor to Turkey for over twenty years. She received the Crime Writers' Association Silver Dagger for her novel Deadly Web. Also, the Swedish Flintax Prize for historical crime fiction for her first Francis Hancock novel, Last Rights.
To find out more, follow Barbara on Twitter @BarbaraNadel.

Radmila May was born in the U.S. but has lived in the U.K. since she was seven apart from seven years in The Hague. She read law at university but did not go into practice. Instead she worked for many years for a firm of law publishers and still does occasional work for them including taking part in a substantial revision and updating of her late husband’s legal practitioners’ work on Criminal Evidence published late 2015. She has also contributed short stories with a distinctly criminal flavour to two of the Oxford Stories anthologies published by Oxpens Press – a third story is to be published shortly in another Oxford Stories anthology – and is now concentrating on her own writing.
Posted by Lizzie at 14:52