‘The House of Lamentations’ by S.G.Maclean 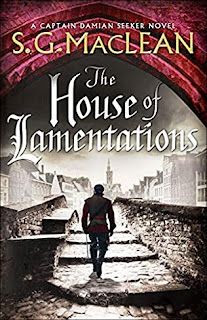 This fifth title in the series set during the reign of Oliver Cromwell and featuring Damian Seeker, right hand man and enforcer for Cromwell’s Secretary of State John Thurloe, mostly takes place in 1658 in Bruges in Flanders. The city had been of considerable importance during the Middle Ages but was in decline by the 17th century. Nonetheless it was there that the young Charles II has established himself, along with his impoverished and gradually diminishing followers, while spinning hopelessly botched plots to re-establish the Stuarts on the throne of England. Seeker is there as well in his capacity as Thurloe’s spy; his cover is that he is working as a carpenter (and calling himself John Carpenter, not so uncommon at a time when people were still taking their surnames from their trades) which enables him to wander freely in the city to seek work and make inquiries where he thinks fit. And to liaise with one of the King’s bedraggled courtiers who is in fact an informer.

Now Seeker receives two letters from England, one in code to say that a ‘she-intelligencer’ is on the way to Bruges to find out who is the informer in Charles’s court, the other (not in code) to tell him that the brother of the woman he loves, the strong-willed Maria Ellingworth, sickened by Cromwell’s abandonment of any pretence at parliamentary democracy and by the ever-harsher persecution of those who disagree with his rule, is not only going to take his own wife and family to Massachusetts but also Maria who, however, is insisting that she will follow Seeker to the Lowlands.

In fact, several women feature strongly in this story (but not Maria). There is the nun Sister Bridget of the Engels Klooster (the English Cloister); albeit sharp-tongued but liking a good gossip as well as anyone. The devoted Royalist Lady Hildred Beaumont who, along with her maid, has come to Bruges; she is as sharp-tongued as Sister Bridget and in fact they know each other from earlier times. But just what is the purpose of her journey? There is Ruth Jones who sought refuge at first in the Engels Klooster and then in the House of Lamentations (in fact, a high-class brothel although Ruth is safer there than she had been in the convent). Ruth’s brother has come to Bruges to find her but his inquiries at the convent are fatal for him. And there is Lady Anne Winter, who has been Seeker’s antagonist in earlier novels.

I am as impressed by this novel as I have been by the writer’s earlier novels in both this series and the previous Alexander Seaton Quartet. Not only is the narrative backed up by impressive authentic-feeling  historical research but the atmosphere of Bruges with its canals and narrow streets and vast numbers of religious establishments is brilliantly conveyed and the numerous characters, some familiar from earlier titles in the series, others new to us, are all well-drawn. Apparently, this is the last in the Seeker series, but I wonder if that is really so. There is a sense that there are yet more stories to be told about these characters. Highly recommended.
------
Reviewer: Radmila May 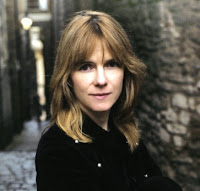 Radmila May was born in the U.S. but has lived in the U.K. since she was seven apart from seven years in The Hague. She read law at university but did not go into practice. Instead she worked for many years for a firm of law publishers and still does occasional work for them including taking part in a substantial revision and updating of her late husband’s legal practitioners’ work on Criminal Evidence published late 2015. She has also contributed short stories with a distinctly criminal flavour to two of the Oxford Stories anthologies published by Oxpens Press – a third story is to be published shortly in another Oxford Stories anthology – and is now concentrating on her own writing.
Posted by Lizzie at 13:17