‘If Looks Could Kill’ by Olivia Kiernan 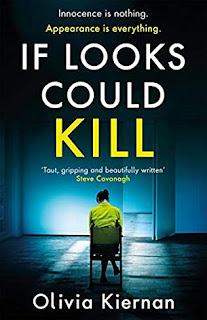 This is the third story in this series featuring DCS Frankie Kiernan of the Bureau for Serious Crime of the Dublin Police. It opens with an apparently unrelated event, a man committing suicide in a Dublin park. But this is not a matter with which Frankie is involved. Her concern is the disappearance in County Wicklow of a middle-aged woman, Debbie Nugent. Normally the Crime Bureau would not concern itself with a simple disappearance, but on this occasion, when the local police come to the house, there are copious bloodstains and murder seems all too likely although there is no trace of Debbie herself. So, Frankie and her partner Baz Harwood are called in to investigate.

Debbie had two daughters, both grown-up, Kirsten, married and living in France, Margot, living at home but spending quite a bit of time with her boyfriend David Sutton. Right from the beginning there are queries. First of all, is Debbie alive or dead? In view of the bloodstains, it seems more likely that she is dead but if so, where is her body? If she was murdered, where is the murder weapon? How was her body transported from the house to wherever it is now? When did she disappear? Two half-drunk mugs of tea have been found indicating that she knew and was friendly with her attacker. Many murders are family-related so what about Debbie’s daughters? Kirsten was in France at the time of her mother’s disappearance, and Margot was in Ireland but is evasive as to the time of her mother’s disappearance. In fact, Margot is evasive about quite a lot of things and more and more Frankie begins to wonder if she couldn’t be at the bottom of the mystery. But she would also like to know something about Debbie herself; neither of the girls know anything about their father and there are no clues as to who he might be, where he is now and whether he had any contact with the girls or Debbie. And Debbie’s colleagues at the garden centre where she had worked, although they testified as to how likeable she was, know nothing about any private life, past or present that she might have had. Margot’s uncooperative attitude does not help her. More and more Frankie becomes convinced that Margot is responsible for whatever happened to her mother while pressure piles on from Frankie’s superiors to, first of all, find the body, secondly, find the culprit.

Then Frankie discovers a link between that suicide in the Dublin park and the fate of Debbie Nugent which sets her off in quite a different direction.

This is very much a police procedural in the modern style with a tough and determined female detective who puts the demands of justice beyond personal considerations.
------
Reviewer: Radmila May

Olivia Kiernan is an Irish writer living in the UK and author of crime thriller, Too Close To Breathe. her first book published in 2018.  She was born and raised in County Meath, near the famed heritage town of Kells and holds an MA in Creative Writing awarded by the University of Sussex.