‘The Scholar’ by Dervla McTiernan 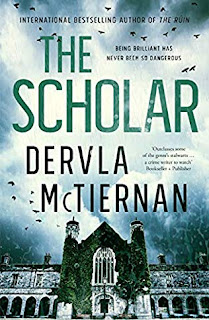 This is the second book in this series featuring Detective Cormac Reilly and his colleagues in the Galway Garda (Irish) police. In the earlier title (The Ruin, reviewed in the Mystery People website in 2018) we learn that Cormac, himself originally from Galway where his career in the Garda had begun, had decided to return to his hometown, partly because he had had enough of big city crime in Dublin, and more because his girlfriend Emma Sweeney had been offered a fantastic job at Darcy Therapeutics, a local therapeutics research centre of worldwide importance based at Galway University.

Emma finds her work at Darcy Therapeutics rewarding but Cormac meets with hostility and suspicion from some of his colleagues, including his boss Superintendent Brian Murphy. Fed up with being side-lined into investigating cold cases, he asks Murphy for the opportunity of dealing with something more immediate; Murphy agrees and passes onto him an ongoing inquiry into a case of serious domestic abuse. But almost immediately Emma discovers in the university car park the body of a young woman who has been deliberately run over, her head and face so badly injured that she is impossible to identify except that Emma thinks that she could be Carline Darcy with whom Emma has worked on research projects although she did not know her well. This is corroborated by a security pass in Carline’s pocket in that name. Cormac is anxious that he should be the officer investigating this death because he fears that Emma, whose mental fragility is delicate owing to a serious episode in her past, might not be treated by some of his colleagues with the sensitivity that he feels she requires. So, Cormac takes the case on but when he goes to Carline’s flat in an upmarket part of Galway (Carline’s grandfather is John Darcy, the boss of Darcy Therapeutics) he finds that Carline is alive and well. So, who was the dead girl? And is there a link between her and a missing girl, Della Lambert, who had been a fellow student of Carline’s but who came from a very different background and who had apparently given up her studies a year or so ago?

Cormac’s investigation leads him into some very difficult terrain. There are those in the university who do not wish to cause any awkwardness to John Darcy or anyone with an interest in Darcy Therapeutics and even some support for this among Cormac’s superiors. Questions arise as to whether Emma was more involved with what was going on than she originally admitted. And while many of Cormac’s colleagues are happy to work with him, there are others who are not and who resent any successes that he might achieve.

This is a well-plotted police procedural with several intricate plot strands. Personally, I would have liked some more physical description of its setting, Galway City and the surrounding landscape.
-------
Reviewer: Radmila May

Dervla McTiernan was born in County Cork, Ireland, to a family of seven. She studied corporate law at the National University of Ireland, Galway and the Law Society of Ireland, and practiced as a lawyer for twelve years. Following the global financial crisis, she moved with her family to Western Australia, where she now lives with her husband and two children.  Her debut novel The Rúin sold in a six-way auction in Australia and New Zealand, and has since sold to the United States, the UK and Ireland, and Germany.

Radmila May was born in the U.S. but has lived in the U.K. since she was seven apart from seven years in The Hague. She read law at university but did not go into practice. Instead she worked for many years for a firm of law publishers and still does occasional work for them including taking part in a substantial revision and updating of her late husband’s legal practitioners’ work on Criminal Evidence published late 2015. She has also contributed short stories with a distinctly criminal flavour to two of the Oxford Stories anthologies published by Oxpens Press – a third story is to be published shortly in another Oxford Stories anthology – and is now concentrating on her own writing.
Posted by Lizzie at 14:13