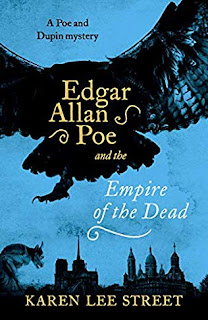 This is the third in this series featuring the real-life 19th century American writer and poet, Edgar Allan Poe, as protagonist and Poe’s fictional detective, the French Chevalier August Dupin.

We go back in time to the death of Poe’s beloved wife Virginia (Sissy) and his deep grief. At this point he is in the United States but when he gets a letter from Dupin asking him to come to Paris for assistance in achieving justice against his ‘nemesis’, Ernest Valdemar who had been responsible for the deaths of Dupin’s grandparents on the scaffold during the French Revolution and for also his parents’ deaths. The letter also suggests that Poe bring documents that he has regarding his own enemy, George Reynolds, and enclosing tickets to cover the cost of the voyage. But when Poe gets to Paris he learns that the letter and tickets were not from Dupin. However, Dupin makes Poe welcome although Poe finds Dupin’s snappish housekeeper, Madame Morel, not easy to get on with. And there is something that Dupin wants to show Poe: how to get into the subterranean passages, relics of ancient mines, beneath Paris, this they do. They find an extraordinary place: endless winding corridors where the walls are lined with human skulls and bones in decorative patterns and boxes of silver and gold and jewellery have been hidden there for decades.

Dupin has also another activity for Poe to take part in: the Paris police have asked Dupin to assist in the search for a letter stolen from the literary salon of a Madame Legrand. This requires a visit by Dupin and Poe to the next literary meeting of the salon where they meet such literary luminaries as Georges Sand, Baudelaire and Eugene Sue. From there it’s only a step to a tavern, a real thieves’ den called the ‘Lapin Blanc’ run by one Mere Ponisse, an ‘ogress’ (a returned female convict), and Poe and Dupin become enmeshed in a fantastic tangle which includes the disappearance of, first, Madame Legrand, and secondly, Madame Morel. Not to mention the self-styled Grand Duke Berith, a magician and mesmerist – who is he? And a return to the subterranean depths of Paris’s Empire of the Dead.

This is, like the author’s two earlier books (see the Mystery People website for reviews), is extremely clever in the writing and the plotting. With its postmodern ironic playfulness and the intertextual weaving of Poe’s own life and Poe’s fiction, it is a highly intellectual contribution to crime fiction. And a great read as well. Recommended.
-------
Reviewer: Radmila May 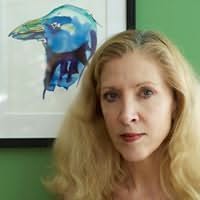 Karen Lee Street was born in Philadelphia, but has lived in London for most of her adult life, and currently resides in Newcastle, Australia. She is the author of Writing and Selling Crime Film Screenplays (2013), short story collection Tattoos and Motorcycles, and Edgar Allan Poe and the London Monster (2016), the first in a Poe/ Dupin mystery trilogy. Edgar Allan Poe and the Jewel of Peru will be published in May 2018. Karen has a PhD in Writing from the University of South Wales and has worked for many years in the European film industry.
www.karenleestreet.com
twitter: @karenleestreet

Radmila May was born in the U.S. but has lived in the U.K. since she was seven apart from seven years in The Hague. She read law at university but did not go into practice. Instead she worked for many years for a firm of law publishers and still does occasional work for them including taking part in a substantial revision and updating of her late husband’s legal practitioners’ work on Criminal Evidence published late 2015. She has also contributed short stories with a distinctly criminal flavour to two of the Oxford Stories anthologies published by Oxpens Press – a third story is to be published shortly in another Oxford Stories anthology – and is now concentrating on her own writing.
Posted by Lizzie at 17:00