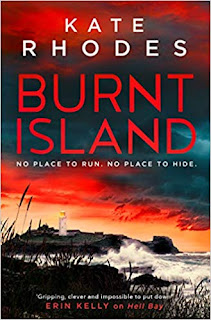 DI Ben Kitto initially came to the Scilly islands the place of his birth to take stock of his life after 10 years working for the murder squad in London. He is now the Deputy Chief of Police for the Scilly Isles.

When a charred body is discovered on the island of St Agnes when the community are preparing for their 5 November festivities Ben Kitto is certain the killer must be an islander, by the position of the body at the top of the hill and the effort involved to set a fire in that location. After telephoning Penzance for forensic assistance Ben hunkers down for the night on the rocky ground to preserve the murder scene. When daylight comes, he makes out markings on a nearby boulder and recognises some Cornish words which when translated exhibit a hatred of incomers to the island.

With a population of just 80 people, Ben has effectively 80 suspects, but who bears that much hate.   And what of the recent additions to the island? Naomi Vine a sculptor of international reputation, who Ben learns wants to put her sculptures on the beach and is being fought by the islanders every step of the way. As Bentalks to people he thought he knew well, more animosity surfaces. And more threats appear – is anyone safe?

The story is rich in well-developed characters, many we have met in the two earlier books, DCI Madron, Ben’s boss, the one with the stick up his backside, Ben’s sergeant Eddie Nickell, and his old school friend Zoe, who could be more than a friend…..

The story is narrated in the first person by Ben Kitto, but there are also twenty-six short third person narratives from Islander Jimmy Curwen known as the Birdman who takes care of wounded birds but who can neither read nor write.

Fast paced and beautifully written this is a clever and complex tale, and as the secrets emerged, I kept thinking I had identified the killer, but I was wrong every time.

Atmospheric and intriguing this is a ‘must read’.  Highly recommended.
-------
Reviewer: Lizzie Sirett

Kate Rhodes was born in London. She has a PhD in modern American literature and has taught English at British and American universities. She spent several years working in the southern states of America, first in Texas, then at a liberal arts college in Florida. Kate’s first collection of poems Reversal was published in 2005, her second collection, The Alice Trap was published in 2008. The Guardian described her poems as “pared back and fast-moving, the short lines full of an energetic lightness of touch”. Kate has been awarded a Hawthornden Fellowship, and her poems have been shortlisted and won prizes in a number of competitions including the Bridport Prize and the Forward Prize. Crossbones Yard was Kate’s first crime novel. Burnt Island is the third book in her new series featuring DI Ben Kitto. Kate is currently writing full-time and lives in Cambridge with her husband Dave Pescod, a writer and film maker.
katerhodes.org
Posted by Lizzie at 16:10