‘In Spite of All Terror’ by V.M.Knox 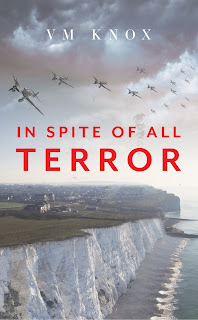 In 1940, after Dunkirk, Britain was standing alone against the Nazi onslaught which had overwhelmed most of Europe. But there was no question of surrender; inspired by the magnificent speeches of Winston Churchill, one phrase from which the title of this book is taken, the nation was standing firm in spite of the knowledge that the Nazi invasion, codenamed Operation Sealion, was imminent. And the British Government did have plans to resist any such invasion. One such plan was the formation of Auxiliary Units to act as guerrillas should the Germans occupy the United Kingdom and defeat other forces such as the Home Guard. Their existence was top-secret, their aim was to inflict as much damage as they could during the anticipated life expectancy of their members of only 10-14 days.

When this story opens, the Battle of Britain is at its height. Clement Wisdom, vicar of All Saints Church in the East Sussex village of Fearnley Maughton, which would be a key landing point should there be a Nazi invasion, is asked to head up an operational patrol recruited from among members of the village’s Home Guard. No-one else must know the identity of the members of the operational patrol except for the most senior policeman in the district whose task would be to vet those members. That man is Inspector David Russell, whom Clement neither likes nor trusts; nonetheless, he is told he must consult Russell unless and until word is received that the operational units are to go into action. Then their first action will be to eliminate Russell.

So Clement sets about recruiting local men, farmers, landowners, shopkeepers and the like who know the country well. Among those are Clement’s best friend, solicitor Peter Kempton, the local doctor, the local bank manager, and local butcher Stanley Russell, son of David Russell. The eight patrol members go on training courses where they are taught to be prepared to kill, using lethal weapons, explosives and the like. And to carry on with their own jobs during the day including Clement’s own role as vicar and guide to the inhabitants of Fearnley Maughton.

A new element is introduced into the village with the arrival of a highly attractive and rather flirtatious nurse, Elsie Wainwright, who is making a play for Stanley. Mary, Clement’s shrewd wife, does not trust Elsie and when Inspector Russell is found dead in the police station, Stanley, who was on bad terms with his father, is an obvious suspect. But is Stanley really the culprit? And what was the role of the alluring Elsie? And could there be a traitor in the operational patrol?

The Auxiliary Units certainly existed although in the event they were never called upon to act. There are compelling descriptions of the air-raids which followed the Battle of Britain, and the accounts of the training that the members of the operational patrols underwent do seem deeply authentic. The author emphasises the determination of the British population at all levels to withstand the enemy when, at a time of maximum danger, the British people were standing alone.
-----
Reviewer: Radmila May

Radmila May was born in the U.S. but has lived in the U.K. since she was seven apart from seven years in The Hague. She read law at university but did not go into practice. Instead she worked for many years for a firm of law publishers and still does occasional work for them including taking part in a substantial revision and updating of her late husband’s legal practitioners’ work on Criminal Evidence published late 2015. She has also contributed short stories with a distinctly criminal flavour to two of the Oxford Stories anthologies published by Oxpens Press – a third story is to be published shortly in another Oxford Stories anthology – and is now concentrating on her own writing.
Posted by Lizzie at 17:53