‘The City in Flames’ by Michael Russell 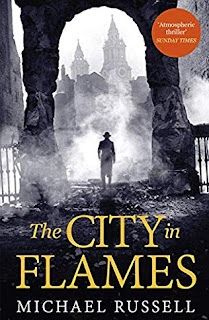 This is the fifth in this excellent series about Ireland in World War II and the story of Detective Inspector Stefan Gillespie of the Special Branch of the Irish Police. Ireland’s troubled history runs deep in these stories; this novel begins in 1921 and Ireland’s fight for independence from Britain with his father David, who had been a member of the Dublin Metropolitan Police but who had resigned and returned to the family farm, being savagely beaten up by the notorious Black-and-Tans. David’s Protestant faith was not enough to save him from serious injury.

By 1940 David’s son Stefan is now in the Irish Police although his father’s Protestantism and his mother’s German nationality mean that he stands somewhat apart from other Irish men and women. However, Stefan now has been suspended from the Irish Police and is back on his father’s farm. The reader, however, knows that there is more to this suspension than meets the eye. Nominally, it is because on a previous assignment when he had been sent to Germany he had met various people who, although themselves Irish had openly gone over to the Nazis, and this has given Stefan’s superior, Superintendent Gregory, the excuse to suspend him. Not that Gregory really believes that Stefan has behaved badly; true to his profoundly devious nature, he is playing a game of deep deception. Stefan is to go to London, which is currently in the throes of the Blitz, where he will find work in a pub popular with the Irish in London and frequented by various members of the IRA as they pass through London.

Apparently. the Germans are anxious to encourage the IRA in acts of violence; they have, it seems a somewhat inflated view of the effectiveness of the Dublin IRA as a weapon against the British and they have sent an agent to liaise with the IRA. We know who that agent is: Vera Eriksen now calling herself Vera Kennedy. We know she is ruthless: she had no compunction in betraying her companion simply because he was foolish and talked too much. And we know that she has become involved in a relationship with Stefan who does not yet know who she is.

This is all part of Superintendent Gregory’s Great Game of deception and counter deception which he, along with his colleague Geroid de Paor of the Irish Secret Service in conjunction with the British Secret Service, is playing in which Stefan is just one among a number of pieces. The ultimate aim is above all to preserve Ireland’s neutrality as the Irish President desires above all else while at the same time giving as much aid to Britain is possible. The various plotlines become increasingly complex until the final skilful unravelling.

Every title in this series is better than the one preceding and I am looking forward to the next one in the series. Which city will it be next time? Belfast – where the Boys in the North are rather more effective than their comrades in the Republic? Warsaw, ground down by the Nazi occupation? Cairo, in the months before El-Alamein? And will Stefan ever be able to make a safe and peaceful life in Ireland for himself and his young son Tom? Highly recommended
----
Reviewer: Radmila May

Michael Russell was born in England. He read English at Oxford before for three years as a farm labourer in North Devon. His knowledge of farming (rather than writing) eventually got him a job as script editor on the English soap opera 'Emmerdale', in the days when it was still called 'Emmerdale Farm'. He went on to become a television writer and producer, writing for such programmes as 'All Creatures Great and Small', 'EastEnders', 'Between the Lines', 'The Bill', 'Midsomer Murders', 'A Touch of Frost'.  By the time he decided to write his first novel he was living in Ireland and it seemed inevitable that he would combine a passion for crime fiction with the stories about Ireland between the First and Second World Wars that he had once heard from his grandmother. The result was The City of Shadows. Michael lives with his family in West Wicklow, Ireland.