‘A Place to Lie’ by Rebecca Griffiths 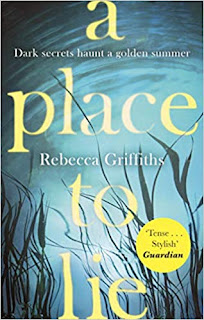 In a Bayswater street an unnamed woman, traumatised by fear of an unknown pursuer but galvanised to desperation by hunger and a wild need for chocolate, dies from stab wounds inflicted by a World War II Nazi knife. And in her last conscious moments she returns to the place where all her fear began when she was not much more than a child, a beautiful place of sunlit meadows and shadowy woods.
She is identified by the contents of her purse as being Caroline Jameson with one sister living, Joanna Peters, now happily married with children, a successful concert pianist. The sisters were long estranged but after being asked by the police to identify Caroline’s body, she is overcome by guilt that she allowed the rift between the two of them to linger unhealed. So, she sets out to find out the truth behind Caroline’s death. It seems that it was Caroline herself who inflicted the fatal wound when making an unprovoked attack on a young man in a local supermarket. His name is Kyle Norris and so far as is known he and Caroline had no previous contact.

The search leads Joanna to the idyllic Gloucestershire village of Witchwood on the Welsh border where the two girls had been sent to stay with their great-aunt Dora when their mother, shattered by the death of their father and seeking refuge in alcohol, tries to kill herself. Joanna, the younger of the two, prettier and musically talented, quickly makes a friend of Ellie, whose mother Liz is married to Ian Fry who keeps the local pub. Carrie, on the other hand, on the brink of puberty, is much the plainer of the two and, in the tradition of teenagers, pretty disagreeable. However, she takes a fancy to Dean, Ian’s handsome son by an earlier marriage and is happy to give Liz and Ian a hand in the bar from time to time especially since Dean flirts with Caroline; unfortunately she takes him seriously and this has repercussions which reverberate far into the future. Nonetheless the three girls get on reasonably well together and are happy to wander together in the deep woods, unaware that they are being watched by at least one person. And then Ellie disappears, and the happy times are over and the tranquil village is revealed as being not a peaceful paradise but more a village of the damned.

The narrative is skilfully interwoven between the present day and the past. And there is a surprising yet convincing twist at the end.
----
Reviewer: Radmila May 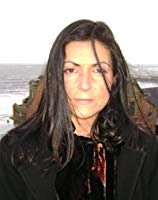 Rebecca Griffiths grew up in rural mid-Wales and went on to gain a first-class honours degree in English literature. After a successful business career in London, Dublin and Scotland she returned to mid-Wales where she now lives with her husband, a prolific artist, and their dog and pet sheep.