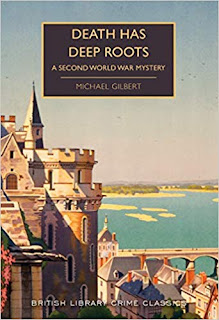 London, 1950, and an enormous crowd is queuing outside the Old Bailey for the first day in the trial of a young French woman, Victoria Lamartine, for murder, at that time a capital offence. Many of those in the crowd are relishing the prospect of her being sentenced to death. However, just as the trial is about to start, the defence request an adjournment because the prisoner wishes to change her lawyers. The judge grants the adjournment (much to the chagrin of the more salacious members of the audience) but only for eight days.

The facts are that the victim was a Major Eric Thoseby who was found stabbed in a hotel where Victoria was working. The link between the two goes back to the war when Victoria was involved with the French Resistance in the Loire Valley. Thoseby was organising the Resistance in the area and another British agent, the young and inexperienced Julian Wells, has arrived to try and contact him. But he disappears and no-one knows if he was alive or dead. Victoria is arrested by the Gestapo and while in prison has a child, a boy. But the child dies and when the war is over Victoria makes her way to London where she finds work in a hotel run by someone who had also been in the Resistance. But when Victoria goes to Thoseby’s room she finds him stabbed to death in a method favoured by Resistance fighters. The most obvious suspect is Victoria; not only is she last the person to have seen Thoseby alive, but it is alleged that he had been the father of her dead child. She insists that he was not and that the child’s father was Julian Wells and that she had wanted Thoseby to tell her where Wells is so she can tell him about his son.

Victoria’s new lawyers are the solicitor Mr Rumbold and his son Nap. As it happens Nap had been acquainted with Thoseby. Rumbold senior is in charge of overseeing matters in England while Nap travels to France to see if he can find out what happened to Julian Wells. But there is more to matters than the fate of Julian Wells; there is the glamorous Josephine Delboise who clearly has an official, or semi-official, interest in the whole affair in France and England. Nap finds himself embroiled in a web of deceit which eventually leads him into great danger, while the trial proceeds at a measured pace and the clock ticks towards the eventual verdict which will decide Victorine’s fate.

As with all this excellent writer’s work this book, first published in 1951, is a pleasure to read both for the excellent unravelling of the plot and the wry humour. And, as with many of the British Library Crime Classics, there is a delightful cover – an illustration of the Chateau of Amboise in the Loire from a contemporary poster. Highly recommended.
------
Reviewer: Radmila May

Michael Gilbert (1912-2006) wrote thrillers, police procedurals and espionage novels that rank among the highest and most varied achievements of British crime writing in the second half of the twentieth century. A founding member of the Crime Writers' Association, Gilbert was for many years partner in a London law firm and drew on his knowledge of the law in writing his most acclaimed novel, Smallbone Deceased.

Radmila May was born in the U.S. but has lived in the U.K. since she was seven apart from seven years in The Hague. She read law at university but did not go into practice. Instead she worked for many years for a firm of law publishers and still does occasional work for them including taking part in a substantial revision and updating of her late husband’s legal practitioners’ work on Criminal Evidence published late 2015. She has also contributed short stories with a distinctly criminal flavour to two of the Oxford Stories anthologies published by Oxpens Press – a third story is to be published shortly in another Oxford Stories anthology – and is now concentrating on her own writing.
Posted by Lizzie at 14:02