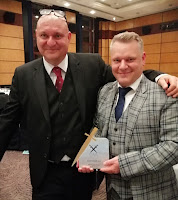 M.W. Craven won the CWA Gold Dagger for his novel
The Puppet Show.
The first in his Detective Washington Poe series.
Craven served in the armed forces and became a probation officer before  started his career as an author.
Mike is a member of the Crime Writers Association and Mystery People.
Photo on the left Mike with his agent
David Headley. 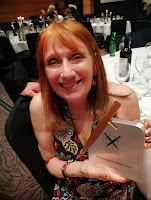 The CWA Dagger in The Library went to Kate Ellis, who was previously shortlisted in 2017.
Kate's novels feature archaeology graduate Detective Sergeant Wesley Peterson who fights crime in South Devon.  Each story combines an intriguing contemporary murder mystery with a parallel historical case. She has also written five books in the spooky Joe Plantagenet series set up in North Yorkshire as well as many short stories for crime fiction anthologies and magazines. Kate was elected a member of The Detection Club in 2014. She is a member of the Crime Writers Association, the Murder Squad, and Mystery People. 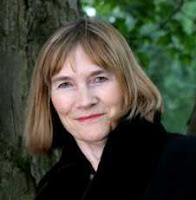 She is past Chair of the Crime Writers' Association, and a member of Mystery People.
For a complete list of all the winners
2019 CWA Daggers – The Winners