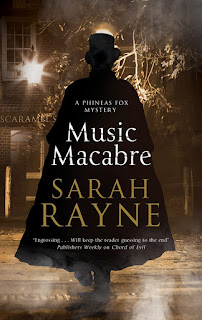 Phineas Fox was enjoying his new commission gathering background material for a biography on the life and loves of composer Franz Liszt, virtuoso composer-pianist.  His research has been going well until he turns up links to a music hall dancer Scaramel who during the late 1880 and 1890’s was notorious during her career for dancing on tables, at somewhere called Linklighters Supper Rooms in Harlequin Court, and that one of her admirers was Frans Liszt, albeit an aging admirer.  Further investigation reveal rumours that she had somehow become tangled in a murder, although the legend could not be verified.

While his is pondering on this new information in bounces Toby Tallis with whom he had recently co-authored a book Bawdy Ballads Down the Ages, which is doing rather well, and Toby has enthusiastic ideas for a second book. Toby is also cousin to Arabella who is ‘walking out’ with Phin, but unfortunately for Phin decamping to Paris for a month.  Resource to the Internet reveals that Harlequin Court and Linklighters still exists, the latter as a restaurant.  Toby instantly books a table and off they go to explore.

Interspersed with Phin’s research into the period we meet Daisy, Scaramel’s maid in the 1880s, who tells the historical story and who along with her brother, nicknamed Link, becomes a target for a killer. Scaramel has an idea for women to warn each other of possible danger from the notorious Jack the Ripper, and it is here that we learn of the link to Liszt.

Phin is keen to talk to the owner of Linklighters to see if any old papers still exist and so we meet Loretta, who is pursuing her own agenda.  He also discovers some sketches of the area and the era in a nearby bookshop but could Phin’s keenness to discover the truth behind the possible murder be Phin’s undoing.

I was fascinated by the clever blending of fact and fiction and the explanation of ‘Linklighters’ being street urchins carrying sticks with lighted tar to guide gentlemen and their ladies through the gloomy London fogs for a charge.  Also, the network of ghost rivers that run under London.

In the author’s notes at the end of the book she says Jack the Ripper got into the story in a far stronger way than she had bargained for.  Although, many people do, I personally have no fascination with Jack the Ripper.  I don’t waste time or thought on horrible people and he definitely falls into that category.  However, I love mysteries and this book falls clearly into that category.   I think it is brilliant and extremely clever and kept me guessing to the end. It also poses an intriguing hypothesis and I have no hesitation in heartily recommending it as a’ not to be missed read’.
------
Reviewer: Lizzie Sirett

Sarah Rayne's first novel was published in 1982, and for several years she juggled writing books with working in property, pounding an elderly typewriter into the small hours in order to meet deadlines.  Much of the inspiration for her dark psychological thrillers comes from the histories and atmospheres of old buildings, a fact that is strongly apparent in many of her settings - Mortmain House in A Dark Dividing, Twygrist Mill in Spider Light, and the Tarleton Theatre in Ghost Song. She has written more than 25 books to date, and her work has met with considerable acclaim. Her books are also published in America, as well as having been translated into German, Dutch, Russian and Turkish.  In 2011, she published the first of a series of ghost-themed books, featuring the Oxford don, Michael Flint, and the antiques dealer, Nell West, who made their debut in Property of a Lady. Several years ago Sarah also wrote six contemporary horror books, originally under the pen-name of Frances Gordon.