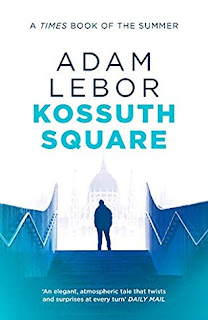 In the Prologue to this compelling story set in the Hungarian capital Budapest, it is 1995 and a beautiful young Roma girl is about to enter a house where a party is going on. We can guess that something bad is about to happen but in this masterfully plotted political thriller we do not find out until the very end.

Move forward to 2015 and Hungary, now very firmly within the EU but one of its more awkward members, has a new prime minister, Reka Bardossy, who is where she is because she has ousted the former Prime Minister, Pal Dezeffy (also Reka’s occasional lover) following a political corruption scandal involving EU passports for illegal migrants some of whom were also Islamic terrorists. Reka was aware of the illegal passports but not of the Islamic terrorist angle; however Dezeffy certainly was and that is what led to his downfall. Now he is out for revenge and his reinstatement as Prime Minister.

This is not something which concerns Balthazar (Tazi) Kovacs, the protagonist of this and the author’s earlier story, District VIII (see www.mysterypeople.co.uk/Reviews/L). He has been called out to an upmarket brothel where a punter has died. The awkwardness for Tazi is that the owner of the brothel is his younger brother, and like, Tazi, a Roma. Many of the Roma community are involved in the criminal underworld and this is why gadjis (non-Roma) are prejudiced against anyone of Roma heritage while Romas are antipathetic to the police. But for Tazi, irrespective of the immense ties of loyalty between each and every Roma, his first duty is to identify the dead man and how he died. The first is easy; he was a Qatari businessman, and it appears there was some link between him and the Islamic terrorist whom Tazi had killed at the end of District VIII, and there are doubts to say the least about he died. And the ABS (Hungarian Security Services), in the shape of the attractive and aristocratic Anastasia Ferenczy, is also on the trail as is reporter Eniko Szalay, Tazi’s ex-girlfriend for whom he still has some feelings. Meanwhile a youthful American has arrived in Budapest; his task, it transpires, is to assist Dezeffy in promoting his comeback through the most modern, media-savvy means available. Luckily for Tazi he is fully supported by his boss, Sandor Takacs. And there is a mysterious man referred to simply as The Librarian. But there are still numerous perils which Tazi has to overcome and much doubt as to the outcome.

I should say at this point that neither Pal Dezeffy nor Reka Bardossy ever have been Prime Minister of Hungary. That position is currently held by Victor Orban, himself a highly controversial figure. And there is no Gendarmerie in Hungary today, which features in both titles by this author, which he based on the fearsome real life Gendarmerie of the WWII years. These are perfectly permissible plot devices.

Much of the story of Kossuth Square follows on from events in District VIII and is told through a number of narrators which makes events rather difficult to disentangle. A list of characters might have helped particularly and an explanation of how Hungarian, not being an Indo-European language, differs radically from most other European languages. And there is quite a bit of Hungarian history and glimpses of Hungarian life, especially among the Roma, which I personally found highly interesting and helped to give valuable increased context to the story. Recommended.
------
Reviewer: Radmila May

Adam LeBor was born in London in 1961. He is a British author, novelist and journalist. is a veteran foreign correspondent who has covered Hungary and eastern Europe since 1990. He is the author of thirteen books, including Hitler's Secret Bankers, which was shortlisted for the Orwell Prize. He writes for the Economist, Financial Times and Monocle. He divides his time between Budapest and London.

Radmila May was born in the U.S. but has lived in the U.K. since she was seven apart from seven years in The Hague. She read law at university but did not go into practice. Instead she worked for many years for a firm of law publishers and still does occasional work for them including taking part in a substantial revision and updating of her late husband’s legal practitioners’ work on Criminal Evidence published late 2015. She has also contributed short stories with a distinctly criminal flavour to two of the Oxford Stories anthologies published by Oxpens Press – a third story is to be published shortly in another Oxford Stories anthology – and is now concentrating on her own writing.
Posted by Lizzie at 13:15