‘Over your Shoulder’ by C J Carver 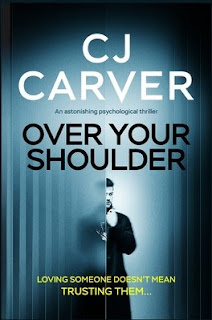 Live coverage of a terrorist attack in London showing a man in a balaclava charging into a restaurant and firing his gun at unarmed dinners is shocking enough. To see one of the diners, jump from his table and attack the gunman, actually wrestling the gun free from gunman’s grasp thereby saving the lives of many of the diners is mesmerisingly high drama. For Nick, at home watching the TV news with his wife Susie, it is poleaxing, for the man they are calling a hero is his brother Rob, who has been dead for 12 years.

Within minutes, Nick’s family descend on him, questions flying about, maybe when he was reported lost sea in his skiff, he didn’t drowned, but had an accident and lost his memory – the possible scenarios abound.  Not least the following morning when the police call to ask Nick ‘where is Rob’? It seems many other people are asking the same question, some in less than pleasant ways, and Nick begins to question ‘Did he actually know his brother Rob’.  And, just where is Rob?

As more and more people question him about his brother, Nick starts to question everything.  It was at the funeral that he met Susie his wife.  How well did Susie know Rob? Old friends contact Nick all looking for Rob, some desperately, it seems.  Did Rob have enemies, his wife Clare devasted to learn that Rob has clearly been alive all this time. Where has he been? What has he been doing?

It would be simple to think that once Nick catches up with Rob he will get the truth of his disappearance.  But Nick finds himself caught in a web of secrets and lies.

The story twists and turns with breath-taking events that turn everything Nick believes on its head. Intricately plotted this is a top thriller that you won’t be able to put down, I couldn’t. Highly recommended.
------
Reviewer: Lizzie Sirett