‘Sister of Mine’ by Laurie Petrou 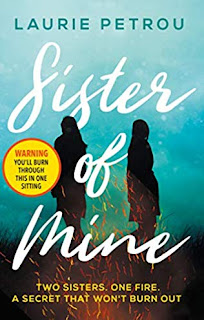 Set in a small town in the USA, Sister of Mine is story of love, jealousy and hate, secrets and debt, and the strength of familial bonds. The prologue starts with a young woman running away from a fire that she has started. The following chapters set a year after the fire and beyond, then relate retrospectively the events leading up to the fire and its knock-on effects.

Penny is the older sister, a woman who wants to get away from town and start afresh but is constantly pulled back. Hattie is the more vibrant beautiful one who stays in the family home. They are an insular unit having no relatives as their father left when they were young, and their mother is dead. Anyone new coming into their lives impacts the other sister. Penny marries only to find her husband is abusive. She has to get away from him and sleeping tablets and matches are the route she chooses. The sisters protect each other and keep their secrets. When a new man comes to town both sisters fall for him.

The small town where the women live is claustrophobic, judgemental and stifling as is the relationship. The device of looking back creates a feeling that things are not going to work out well. The story is told in the first person by Penny, which may not be totally reliable, and she certainly seems to be always holding back and justifying her actions.

The book is written in a descriptive style that may not appeal to readers who like the sharper tight writing of many crime novels. It is in essence a gentler psychological suspense following a simple narrative (as there aren’t a lot of twists turns). A good read for those who are looking for a well-drawn character-driven story.
------
Reviewer Christine Hammacott

Laurie Petrou is an associate professor at the RTA School of Media at Ryerson University in Toronto. Her first book, a collection of short stories titled Between (Pedlar Press, 2006), was a Globe and Mail Top 100 Book (Top 5 First Fiction). She is the inaugural winner of the 2016 Half the World Global Literati Award for her then-unpublished novel Sister of Mine.

Christine Hammacott lives near Southampton and runs her own design consultancy. She started her career working in publishing as a book designer and now creates covers for indie-authors. She writes page-turning fiction that deals with the psychological effects of crime. Her debut novel A Taste of Ash is available on Amazon, click on the title to read a review.
website: www.christinehammacott.com
twitter: /ChrisHammacott
Facebook: /christinehammacott.author
Posted by Lizzie at 10:00