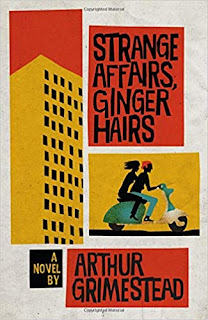 Ginger Jones is eighteen, unemployed, broke and generally depressed with life. He lives on a council estate in Hull with his parents, both eccentric, dishonest and indifferent toward him. His best pal has turned to crime to live his life in style. Ginger is adamant he wouldn’t follow suit and wants a life free of trouble. This is not to be as a valuable and much wanted item turns up in his fried fish. Then everything changes.

Ginger is pursued by the local gang leader and even his best friend turns on him. He decided to go on the run, leave his achingly lonely life and head for who knows where. Here he meets a spoilt upper-class woman who, using her charm and his naivety, draws him into her life of robbery and violence. More people are now after him and his only way to save himself is to try and turn the tables on his pursuers.

This is fun and witty read, full of colourful characters, farcical situations, many hysterical one-liners, that had me laughing out loud on public transport. It comes highly recommended and is perfect escapism (if you’ll pardon the pun).
------
Reviewer: Linda Regan
Lindareganonline.co.uk

Arthur Grimestead was born in Hull but doesn't blame anyone. He lives with a woman, a dog, and a cat (no order of preference). Strange Affairs, Ginger Hairs is his debut.

Linda Regan is the author of six police procedural crime novels. She is also an actress. She holds a Masters degree in critical writing and journalism, and writes a regular column, including book reviews, for three magazines. She also presents the book-club spot on BBC Radio . She is an avid reader, and welcomes the chance to read new writers.


To read a review of Linda's most recent book
Sisterhoods
click on the title.


www.lindareganonline.co.uk
Posted by Lizzie at 13:27