‘The Promise’ by Katerina Diamond 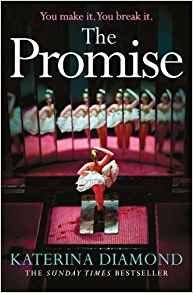 An online encounter triggers a series of murders in which DS Imogen Grey, her partner DS Adrian Miles, and the reader are plunged into the murky world of web-based dating games where defences are lowered,fantasies abound, and where predators exploit the vulnerable and prey upon the gullible.  The Promise is the fourth in Katerina Diamond’s DS Imogen Grey series and is a superb, gritty thriller that cleverly weavestogether three different narratives.  The first charts the progress of Grey and Miles as they race against time to track down the serial killer whilst dealing with their own personal and professional challenges along the way.
The second story involves a troubled young man, Connor, who has just moved to Exeter fromCalifornia and is now negotiating his way through the unfamiliar English secondary school system and an abusive relationship with his father.  The third perspective is provided through woman who relates her story through a series of diarised reminiscences that punctuate the novel.  As the novel accelerates towards itsdénouement the three tales converge, keeping the reader guessing to the end.

Diamond’s style is energetic and pacey, the book is hard to put down and easy to read, and successfully reflects the modern world it depicts.  The author deals empathetically with contemporary issues that are often dark and sometimes challenging, and the novel’s treatment of violent criminal acts exposes their destructive and obscene nature without ever becoming gratuitous.  This is a terrific example of tense detective fiction that intrigues, shocks, and always entertains.  A page-turner par excellence!
------
Reviewer: Dot Marshall-Gent

Katerina Diamond is the author of the Sunday Times Best Selling crime thriller The Teacher, and number 1 kindle bestselling novel The Secret.  Katerina was born in Weston-super-Mare and has lived in various places since including Greece, Cyprus, Derby, East London and Exeter.  She currently lives in East Kent.