‘The Year of the Snake’ by M.J. Trow & Maryanne Coleman 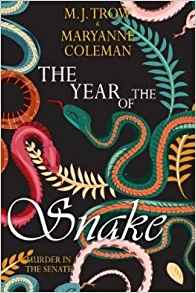 This novel is set in Rome in the 1st century A.D. at a time when Rome had ceased to be a republic since the reign of Augustus over 100 years before since when there has been a succession of Emperors. The current Emperor is now Nero, youthful but cruel and capricious to the point of insanity. The slave Calidus, steward to the elderly Gaius Julius Nerva, has returned home to find his master dead and the household grieving especially Nerva’s wife Flavia. Calidus is also saddened by his master’s death: he had been born into Nerva’s household and Nerva, who has no living children of his own, had been especially kind to him (by the rather strict standards of the time). Nerva’s death was not unexpected; he was old, and his household say that his death was peaceful. But Calidus suspects otherwise; Nerva had vomited copiously before his death, and that to Calidus indicates something more than just old age. Could Nerva have been poisoned? A welcome surprise for Calidus is that Nerva in his will has freed Calidus who is now no longer a slave. He promises Flavia that he will continue as steward of the household, and in return she frees Paula, Calidus’s beloved wife. As a freeman Calidus is more at liberty to unravel the mystery of Nerva’s death. The most likely source is a dinner party which Nerva had attended three days before his death; it was after that that Nerva had begun to feel unwell. A number of people had attended the dinner: among them Rome’s great and not so good. Calidus must now investigate whether it was poison that Nerva had taken and if so what and who was responsible. His quest takes down all sorts of dangerous byways and highways too: among those he encounters are Nero himself, Nero’s mistress and soon to be wife Poppaea, and Agrippina, Nero’s mother, each of whom is as lethal to those they encounter who they think are in their way as they are to each other.

Ancient Rome was a place where danger lurked round every corner, and those deemed trustworthy often turned out to be no more so than the rest of the vipers infesting the city. And although Nero, Poppaea, and Agrippina are real characters as are some of the others (eg. Seneca, Nero’s tutor), the fictitious characters are mostly no better than their real-life counterparts. But Calidus does find allies: the cutpurse Piso, a truly Dickensian character who haunts the alleys of Rome’s slums with his ears to the ground and his fingers outstretched for other people’s property; the elusive Locusta who knows all about poison; and the Optio Cineas Regullus of the Praetorian Guard. And in the end his quest does lead him to the murderer of his old master in a dramatic Christie-like denouement.

I was very much impressed by the depth of scholarship, unobtrusive yet convincing, in this story, as well as by its intricate plotting and by the lively characters whether real-life or fictional. Recommended.
------
Reviewer: Radmila May 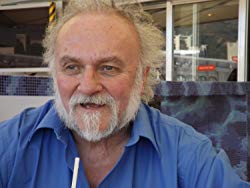 M J Trow (the 'M' as most people know by now stands for Meirion, a Welsh name few can manage, so he writes as M J, is known by all and sundry as Mei, rhyming with 'my') has been writing for many years, with his first book - The Adventures of Inspector Lestrade - being published in 1984 by Macmillan. More Lestrades followed and then some true crime and somehow it all snowballed so now he has many historical biographies and three other crime series (Maxwell, Marlowe and Grand and Batchelor, the latter two written with his wife, writing as Maryanne Coleman, though her name is Carol, actually!) to his credit. He claims to be retired, but that's just from teaching. In fact, he has never been busier and is a sought after 'ghost' these days as well as historian and novelist, with many different subjects' stories having been told through him. He has recently started collaborating on fiction projects (with someone other than his wife, that is) and finds it a really exciting and pleasurable experience.

Maryanne Coleman is the pen name of Carol Trow, wife of M J Trow. Her own books are fantasy, two so far in a projected trilogy - Goblin Market and Pandemonium - with a third (working title Saturnalia) in the pipeline. As well as writing her own fantasy novels, she co-writes the Marlowe series with her husband - somehow, they never argue and scarily enough when proofing they can never remember who wrote what, which must be a good sign. They have recently completed the first of a series, featuring Victorian detectives Grand and Batchelor - this was a change of pace from the Tudor Marlowes and the timelessness of fantasy, with the gritty back streets of Victorian London and the muddy lanes of Washington DC being the background for this exciting new series.