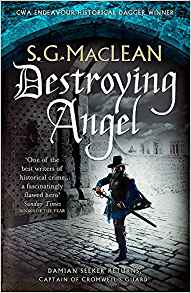 This story is the third in the author’s Damian Seeker series set in mid-seventeenth century England. By now the fighting is over, Charles I having been beheaded in 1649, and the attempt by his son, the future Charles II, to retake the throne has culminated in his defeat at the Battle of Worcester and his subsequent flight to France. Oliver Cromwell’s attempt to rule through what is left of the Parliament has proved abortive, while Royalist plots are still abounding, although largely ineffectual. So, Cromwell decide to rule England through the Army, dividing the country into a number of regions, each ruled by a major-general. His aims are threefold: to deal with remaining Royalists by identifying them, taxing them and disarming them; to save money by the major-generals ruling through locally appointed officials (commissioners); and to encourage godliness and discourage vice in any form such as heavy drinking, music, dancing, fairs, even celebrating festivals such as Christmas(!) while special officials known as ‘triers’ scrutinise minutely local preachers and teachers for their religious purity.

Seeker has been sent to York to Deputy Major General Robert Lilburne by John Thurloe, Cromwell’s Secretary of State and spymaster of a network which reaches into every corner of Europe. Seeker is Thurloe’s chief investigator and enforcer; having been in York for a few months he hopes he will be free to return to London. Instead Thurloe has informed Lilburne that Seeker is to go still further north to the moorland village of Faithly to issue instructions the local commissioner, wool merchant Matthew Pullen and to investigate the local squire Sir Edward Faithly. Faithly’s father and older brother Thomas fought in the Civil War for the Royalists but are now in exile in France, while Edward had avoided taking either side, pleading injury and thus avoiding forfeiture of his estate. However, Seeker has been informed that Thomas has returned to England and having been taken prisoner has escaped from custody and so must be found. And Faithly village is expecting a visitation by the trier Caleb Turner whose basilisk gaze is now turned on local vicar Septimus Jenkin who is far from being the steely Puritan that Turner thinks he should be. A special dinner is being prepared by Mathew Pullen’s mother Bess with the aid of her ward the otherworldly Gwendolyn and a maid in honour of Turner and his wife; other guests will include Sir Edward and his wife, his clerk the clever and devious Laurence Ingoldby, Jenkin, Seeker himself and also the unpleasant gravedigger and local constable Abel Sharrock, who has designs on Pullen’s job, and his wife. At the last moment Turner and his wife decline the invitation; nonetheless the dinner goes ahead beginning with a delicious soup of mushrooms gathered that morning by Gwendolyn in the local woods and prepared by her. But Gwendolyn becomes ill; two days later she dies. And when Turner finally does turn up, Seeker recognises not him but his wife as someone for whom he has been searching for a long, long time. And then Gwendolyn’s only friend, the mysterious Tansy, identifies the probable cause of Gwendolyn’s death as being the beautiful but deadly poisonous mushroom fly agaric, also known as ‘Destroying Angel’ . . . . But was Gwendolyn the intended victim or was that someone else?

As with this author’s other novels, the historical background is deeply impressive, and the interplay of real historical characters and fictional ones is highly convincing. Readers will be anxious to follow Seeker’s later progress and I must hope that some of the characters will also reappear. Recommended.
------
Reviewer: Radmila May