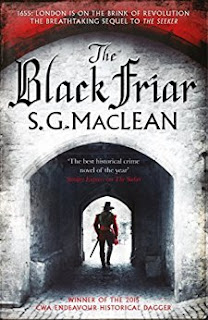 London 1655 and, as in the author's previous Dagger-winning first title in The Seeker in the series of that name, this novel is set during the rule of Oliver Cromwell who, since the Parliamentarian victory in the English Civil War and the fall and subsequent execution of King Charles I, had ruled through Parliament as Lord Protector. He still does so but he is in control of the army which Parliament, coming more and more under the influence of religious and political extremists, wishes to take from him. Cromwell will have none of this and intends to abolish Parliament and establish his own authoritarian rule. He has already dealt with most of the Levellers who promulgated the idea of the equality of all men – the idea! Whatever next! - although a few are still at large and being sought. But now there are the Fifth Monarchists, who believe that, with Charles I dead, the time has come to march on Rome and the Papacy after which assured victory it would be time to prepare for Christ's return to earth. They are certainly active with men and women preachers prophesying in many churches and on street corners. And the exiled young King Charles II, living in penury in the Netherlands, still has active supporters both here and abroad and they have formed themselves into a secret organisation, The Sealed Knot. Many of their plots are ridiculous and doomed to failure but could one succeed? Cromwell's Secretary of State John Thurloe, master of a formidable intelligence network both in England and abroad, is, through Damian Seeker, his chief investigator and enforcer, always on the lookout for information. But Thurloe is seriously ill and his precarious health allows the ambitions of some members of his staff to flourish.

So, when the body of a man, dressed in the robes of a Dominican friar, the Order having been banned from England in the previous century, is found when the old Dominican priory is being demolished, Seeker goes to investigate. And it becomes apparent that the body is not old: it is very recent and the man was walled up alive and then died of suffocation. So if he wasn't a Dominican friar who was he? Seeker recognises him: he is Carter Blyth, one of Thurloe's spies, last known to be in the Netherlands and spying on the royalists and having died there in an explosion. So what was he doing in England, calling himself Gideon Fell and lodging with the family of Goodman Crowe? Father, wife Elizabeth and daughter Patience and son Nathaniel, all, with the exception of the backward Nathaniel, fanatical Fifth Monarchists? Is there a connection with the Fifth Monarchist uprising which happens in the course of the narrative? Or was there a connection between Blyth and Lady Anne Winter, passionate Royalist?

Many of the characters in the narrative have occurred in the previous Seeker novel including Lady Anne herself, Samuel Kent, still keeping, with his niece Grace, his popular coffee house in the heart of the City, the radical lawyer Elias Ellingworth, more interested in publishing his revolutionary pamphlets than in his legal practice. Are they involved in some way? And what about Maria, Ellingworth's beautiful sister – she and Seeker have been lovers but his loyalty to Cromwell and her strong support of her brother and his politics form an apparently insuperable barrier. And four children have gone missing and all have a connection to the New England schoolmaster Shadrach Jones. He seems guileless, but is he? And is someone in Thurloe's staff involved?
All this, and a great deal more involving other historical personages including the poet Andrew Marvell and the diarist Samuel Pepys make for a satisfactorily complex and fascinating story backed up by impeccable historical research, all set in a time of extraordinary political and religious turmoil. Highly recommended.
------
Reviewer: Radmila May