‘Fall Down Dead’ by Stephen Booth 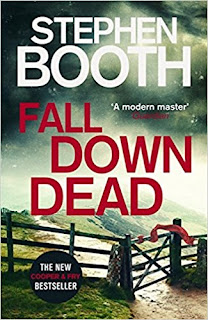 Published by Sphere,
16 August 2018.
ISBN: 978-0-7515-6761-8
Having returned to Edendale Police station following a call out to a domestic stabbing to which the husband of the victim had immediately confessed, DI Ben Cooper  has barely sat himself down at his desk when news comes in of a group of walkers lost on Kinder Scout.

As well as being the highest point in the peak district and offering amazing views, Kinder Scout has also been responsible for many deaths over the years. It’s easy to get lost on it and, additionally, fog can descend very suddenly.  News comes in from the MRT, the Peak District Mountain Rescue Team which had been formed in the 1960’s when three young Rover Scouts had lost their lives on Kinder, that a party of twelve have been located. One casualty has been taken to hospital with a suspected broken ankle.  At this point one of the group say ‘Where’s Faith?’

Following an exhaustive search Faith’sbody is finally located at the foot of one of the highest rocks ‘Dead Woman’s Drop’.  Although Faith’s death could be accidental it is classed as an ‘unexplained death’ and the investigation falls to Ben.

The New Trespassers walking Group, as Ben discovers they call themselves, was founded by Darius Roth, a relatively well-off chap who says he has links to a member of the original Kinder Mass Trespass of 1932.  After interviewing the members of the group Ben can’t imagine what they actually have in common. But as he pieces together what happened on Kinder Scout he becomes certain one them is a killer.

Meanwhile, what of DS Diane Fry, who has eventually managed to get transferred out of Edendale, a place she totally despised. Well suddenly finds herself summons to a meeting with The Professional Standards Department who deal with gross misconduct.  She racks her brains as to what she could possibly have done that has now returned to bite her. Could it be related to her sister who was at one time heavily into drugs?

Fall Down Dead is the 18th book in the series.  We met DC Ben Cooper and DC Diane Fry, who had been transferred to Edendale, in the first book Black Dog.  They come from very different backgrounds and from the off their relationship was prickly and at times quite difficult. While Ben had a happy and secure family background, Diane had the opposite. But long-time readers of this excellent series will know that all has not been plain sailing for Ben Cooper, he too has had his tragedies. Despite the ups and downs of their odd relationship, will Diane now turn to Ben in what could turn out to be catastrophic for her career, if it’s about what she suspects it might be?

A compelling read with well-developed characters, one of the most forceful being the Peak District itself which is an atmospheric theme that runs through all the books in this renowned series. Equally fascinating was the way the background to the group of hikers was revealed, and eventually the killer was unmasked. But I didn’t guess who! Most highly recommended.
-----
Lizzie Sirett

Stephen Booth was born in the English Pennine mill town of Burnley. He was brought up on the Lancashire coast at Blackpool, where he attended Arnold School. He began his career in journalism by editing his school magazine and wrote his first novel at the age of 12. After graduating from City of Birmingham Polytechnic (now Birmingham University), Stephen moved to Manchester to train as a teacher, but escaped from the profession after a terrifying spell as a trainee teacher in a big city comprehensive school.  Starting work on his first newspaper in Wilmslow, Cheshire, in 1974, Stephen was a specialist rugby union reporter, as well as working night shifts as a sub-editor on the Daily Express and The Guardian. This was followed by periods with local newspapers in Yorkshire, Nottinghamshire and Derbyshire. He was at various times Production Editor of the Farming Guardian magazine, Regional Secretary of the British Guild of Editors, and one of the UK's first qualified assessors for the NVQ in Production Journalism.  Freelance work began with rugby reports for national newspapers and local radio stations. Stephen has also had articles and photographs published in a wide range of specialist magazines, from Scottish Memories to Countrylovers Magazine, from Cat World to Canal and Riverboat, and one short story broadcast on BBC radio. In 1999, his writing career changed direction when, in rapid succession, he was shortlisted for the Dundee Bool Prize and the Crime Writers' Association Debut Dagger competition for new writers, then won the £5,000 Lichfield Prize for his unpublished novel The Only Dead Thing and signed a two-book contract with HarperCollins for a series of crime novels.  In 2000, Stephen's first published novel, Black Dog, marked the arrival in print of his best-known creations - two young Derbyshire police detectives, DC Ben Cooper and DS Diane Fry. Black Dog was the named by the London Evening Standard as one of the six best crime novels of the year - the only book on their list written by a British author. In the USA, it won the Barry Award for Best British Crime Novel. The second Cooper & Fry novel, Dancing with the Virgins, was shortlisted for the UK's top crime writing award, the Gold Dagger, and went on to win Stephen a Barry Award for the second year running.  The publication of Blind to the Bones that year resulted in Stephen winning the Crime Writers' Association's 'Dagger in the Library' Award, presented to the author whose books have given readers most pleasure. All the books are set in England's beautiful and atmospheric Peak District.
www.stephen-booth.com